03
History and Culture
Come Alive:
The Castle Town
by the Sea 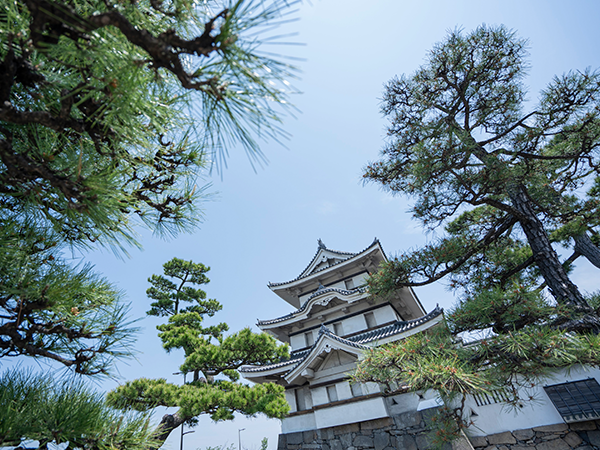 The Matsudaira family of the Takamatsu Domain, related to the former ruling family, is still loved by the local people as the lord of Takamatsu.

Deeply connected to the Mito Domain, which was one of the three great collateral branches of the Tokugawa Shogunate family, eleven generations of the Matsudaira family governed Takamatsu for 226 years (1642-1868) in the Edo period. The Matsudaira Takamatsu Domain was rated at 120,000 koku (a koku was a unit of measurement in Japan that rated the productivity of land amounting to approx. 180 liters, 150 kilograms, 330 pounds, which was enough to feed 1 person for 1 year.) Takamatsu Castle, the Ritsurinso Villa, which is present-day Ritsurin Garden, the samurai residential area, and the rest of the castle town were developed during the Matsudaira’s governance. Also, traditional crafts had flourished including Kagawa lacquerware and the local stone industry with Aji stone.
For history lovers, it is recommended to visit Tamamo Park, the historic site of Takamatsu Castle, and Ritsurin Garden in the city center, and then go to south of the city to the historic town of Busshozan, home to the Matsudaira family temple, Honenji. You will be able to experience the history and culture unique to the castle town. Both are must-see spots that can be reached by public transportation for travelers. 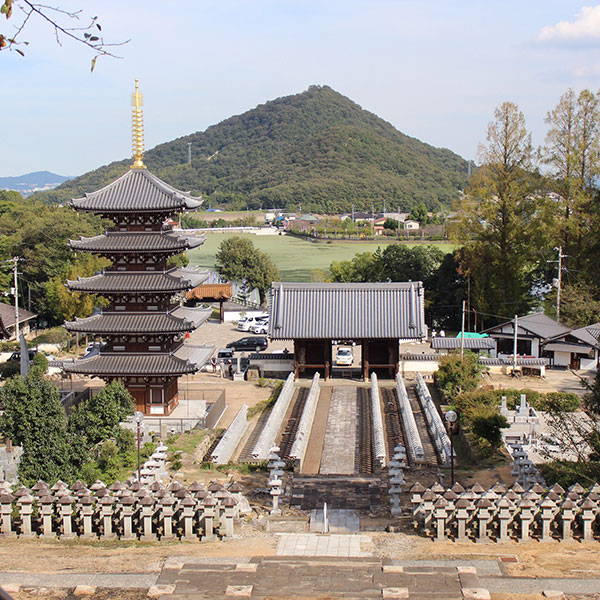 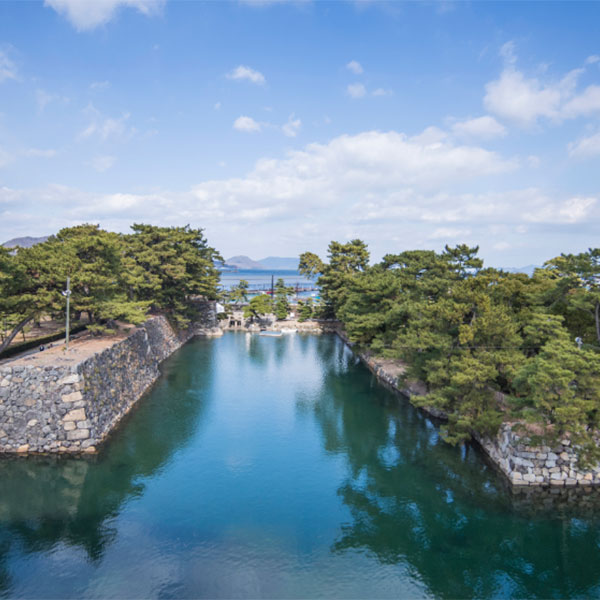 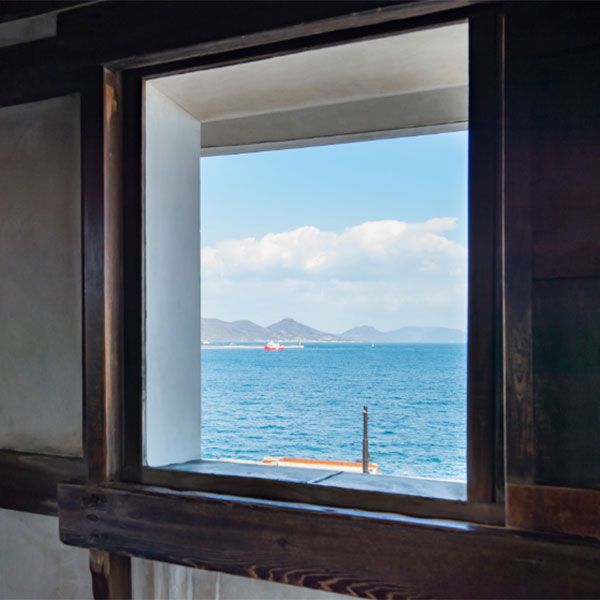 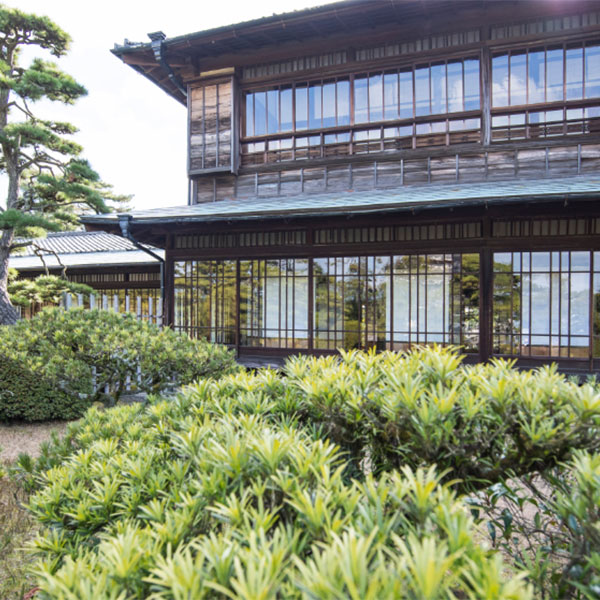 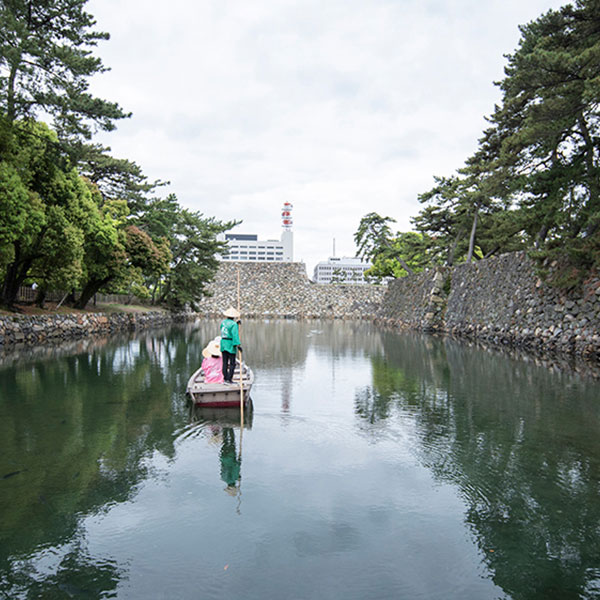 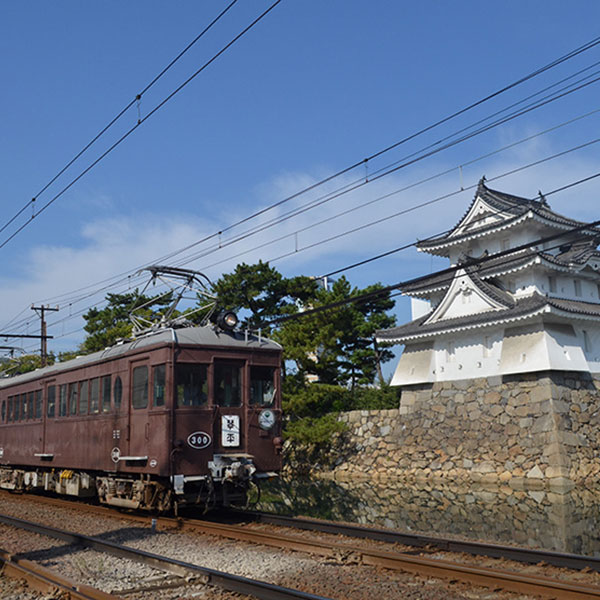 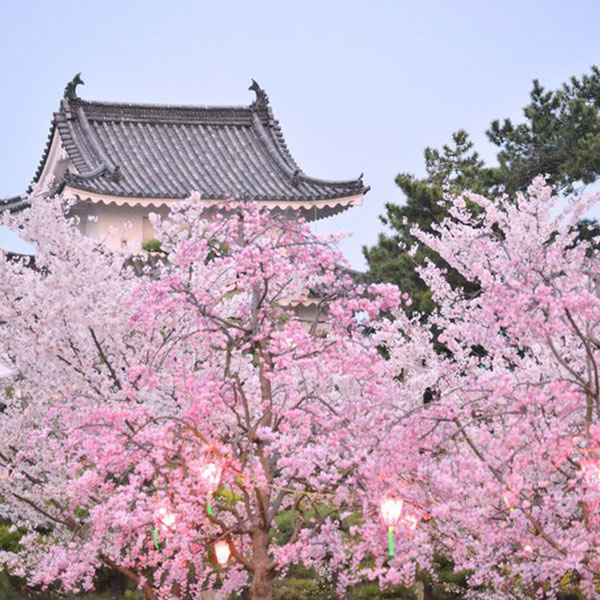 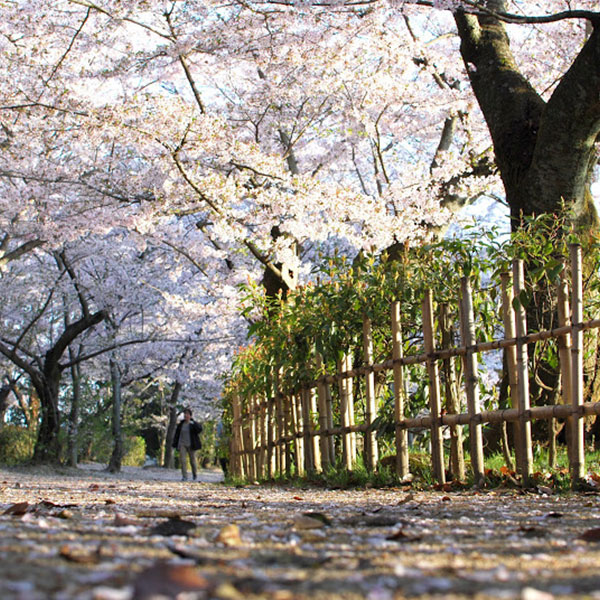 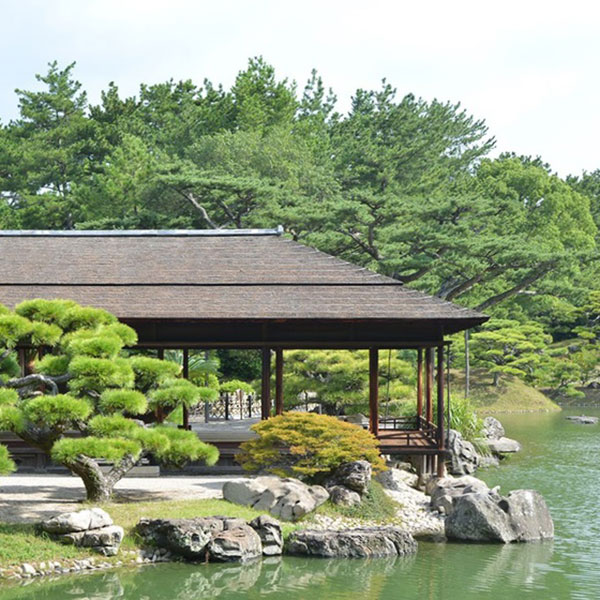 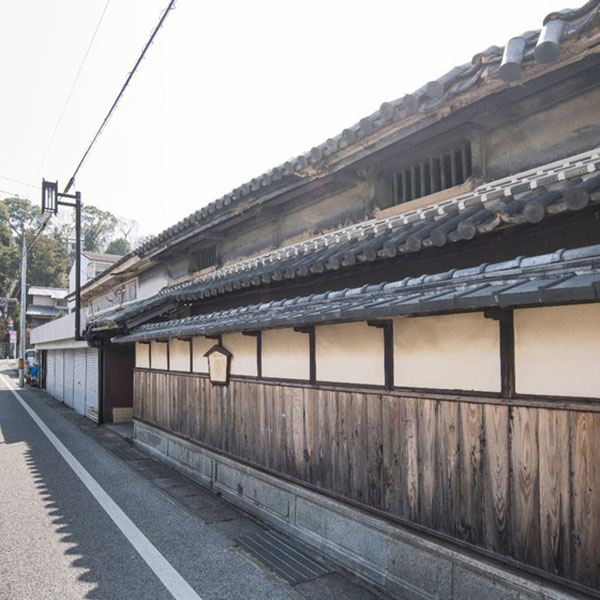 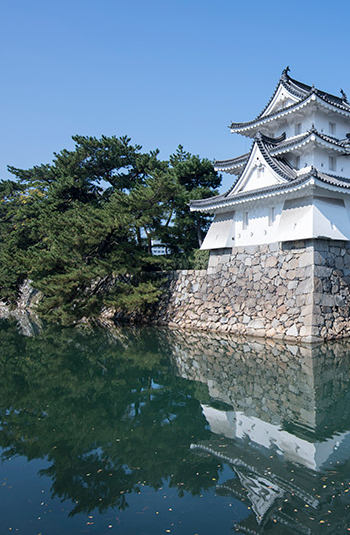 Takamatsu Castle
Where the Lord Resided
#01
Takamatsu Castle, which was once the residence of the Matsudaira family, is now open to the public as Tamamo Park. This historic site is a very popular tourist spot, and the park is also loved by locals with a wide variety of events held on weekends and cherry blossom viewing in spring.
On the castle premises, there are notable structures designated as Important Cultural Properties, such as Ushitora Yagura (Northeast Tower), Tsukimi Yagura (Moon-Viewing Tower), Mizute Gomon (Waterside Gate), and Watari Yagura (Connecting Gallery) as well as the Hiunkakua, which was the villa of the Matsudaira family, built between 1914 and 1917 in the Taisho era. Once you step inside the castle premises, you cannot help thinking about the past and how lords of Takamatsu used to live there.
It is believed that Ikoma Chikamasa began construction of Takamatsu Castle in 1588 as Toyotomi Hideyoshi awarded him the province of Sanuki. Later the Ikoma family was relocated, and the Matsudaira family was transferred as the new lord of Takamatsu. Matsudaira Yorishige then undertook a renovation of the castle in 1670. The main donjon, Tenshu, was demolished in 1884 due to age. If it still existed today, the 26.6-meter height of Tenshu would be the tallest donjon on the island of Shikoku.
Takamatsu Castle is known as one of Japan's three great seaside castles, along with Imabari Castle and Nakatsu Castle. It is characterized by its revolutionary design that draws the seawater of the Seto Inland Sea inside the moat. If you look into the moat, you can see saltwater fish such as sea bream. You can sail through the moat on a traditional boat called a Wasen, which is popular among tourists. You can also feed sea bream to bring you good luck. 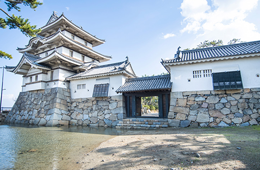 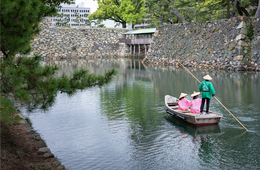 Imagine that you are a feudal lord or princess and make your wish come true by feeding sea breams.
7 things you can do in Takamatsu 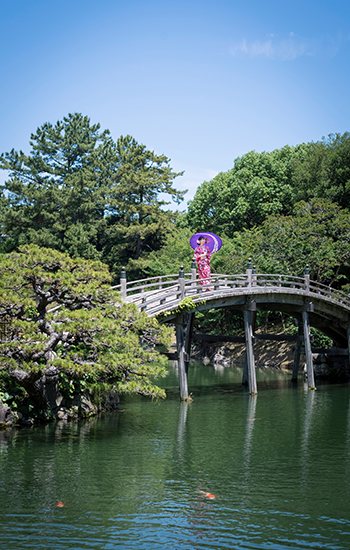 Ritsurin Garden:
Beautiful Past
and Present
#02
The Matsudaira family's villa, Ritsurinso (present-day Ritsurin Garden), is a work of art created by successive lords with love and passion. It is said that Matsudaira Yorishige, the first lord of the Takamatsu Domain, took over Ritsurinso, which had been originally built by the Ikoma family of the Sanuki Domain. Lord Yorishige used the villa for martial arts and hunting. After he retired, it was further developed as a feudal lord's garden for entertaining important guests. It was refined as a Japanese strolling garden, which resembles today's Ritsurin Garden, in the era of the 5th feudal lord, Matsudaira Yoritaka.
Today, it is designated as a Japan's Special Place of Scenic Beauty. It has been loved by Takamatsu citizens as a symbol of Takamatsu and Kagawa, and now it attracts international tourists from all over the world. There are six ponds and 13 mounds that are skillfully arranged against the backdrop of Mt. Shiun. Each step you take reveals a new scenery.
In the garden, you can have a cup of matcha tea at the Kikugetsutei, a large historic tea house of the successive lords, or even ride a traditional Japanese boat like a lord or princess. You can enjoy the beautiful scenery in any season, but the cherry blossoms in spring and the autumn leaves are a must-see. 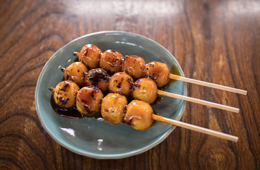 Ritsurin Garden A Trip in Search of Traditional Japanese Sweets 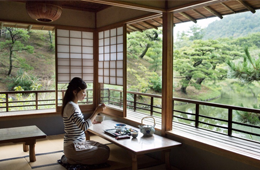 Relax and Stroll
through the Historic
Streets of Busshozan
#03
Located in the suburbs of Takamatsu, the town of Busshozan prospered as a temple town during the Edo period. Hozenji Temple has been the Takamatsu Matsudairas’ family temple generation after generation. Hozenji-onari Highway was the road the Matsudaira family traveled to visit the gravesite at Hozenji Temple. This highway connects Busshozan Station on the Kotoden Kotohira Line to Hozenji Temple, and there are still historic townscapes of the Edo period left along the way. There are even period houses, which are architecturally significant. This hideaway blends a traditional atmosphere with a modern charm. You can spend a day walking around Busshozan while exploring a modern Onsen, a day-trip hot spring facility, as well as stylish cafes and shops in renovated old houses within walking distance from the station. In addition, Busshozan Park near Hozenji Temple is a popular spot for cherry blossom viewing with 250 Someiyoshino cherry trees and azaleas in spring, as well as beautiful autumn leaves, namely zelkova leaves, in fall. 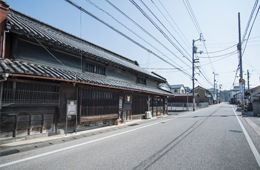 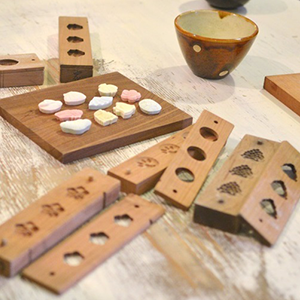 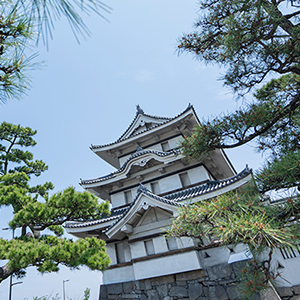 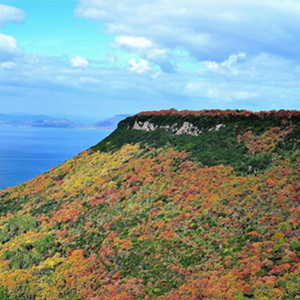 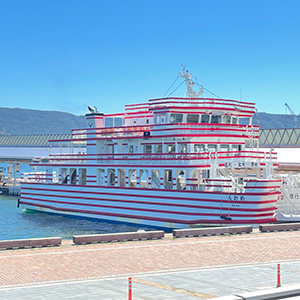