Ultra Udon Maranic is a nearly 60-kilometer ultramarathon that also offers tasty Sanuki Udon Noodles to eat instead of bread and a banana at the aid station. There are six udon stalls and a runner will eat six bowls of udon. This sounds grueling, but runners leave the udon stalls with their biggest smiles.

The course of Ultra Udon Maranic is longer than a full marathon. It was held in Kagawa in the past. Fans of the marathon organized Ultra Udon Maranic to bring back their favorite festivity.
“Simply running a long distance is uninspired. This is Kagawa and there is no way to escape its traditional food, udon.”
The name of the race, maranic, is a combination of the words marathon and picnic, based on the steering committee’s wish for runners to enjoy running as if they are on a picnic.

See the official website of Ultra Udon Maranic for information about the upcoming event and the course. 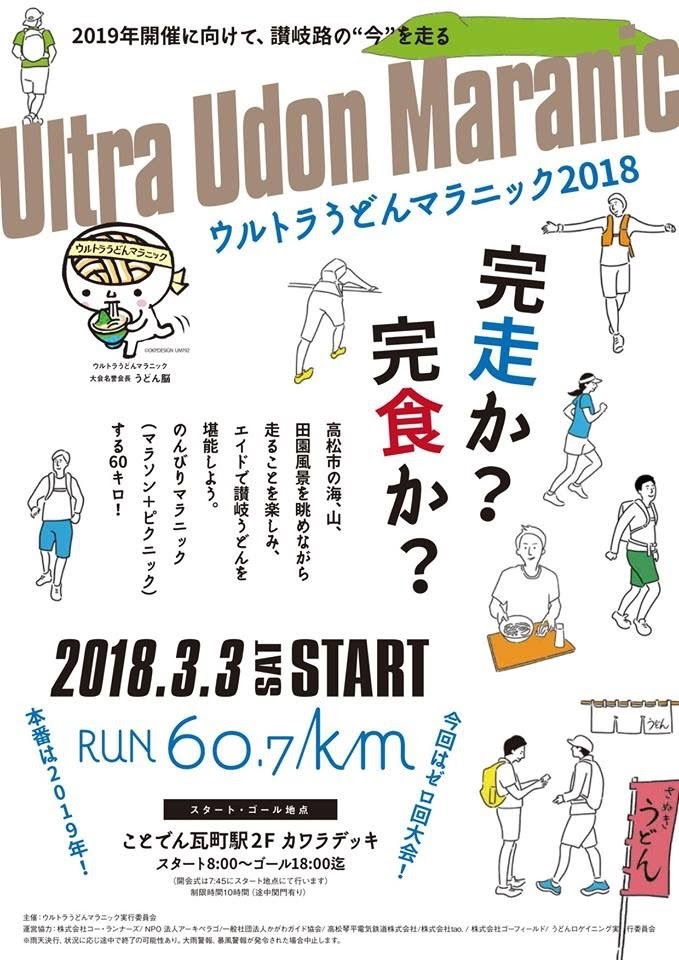 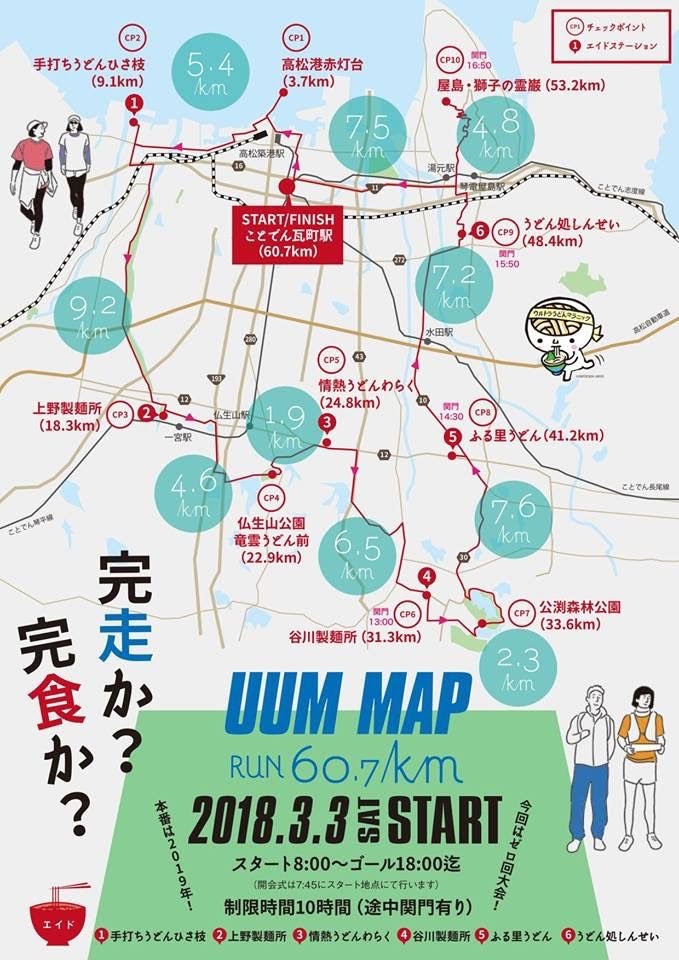 The preliminary event in 2018 used a 60.7-kilometer course in Takamatsu-shi.
Participants make a circuit around Takamatsu and finish by running up Mt. Yashima, about 300 meters above sea level, to its peak. The goal commands a panoramic view of Takamatsu and the Seto Inland Sea. Runners travel the so-called Sanukiji roads to reach the finish within 10 hours.

During the marathon, participants do not compete for the shortest time to the finish. Instead, those who run the full course and/or eat full bowls of udon receive a prize(s).
Eat a bowl or half-bowl of udon at each of the six stalls, and you can be recognized as having eaten the full bowls.

Udonno, a popular character in Kagawa, was appointed an honorary chairperson for the event. 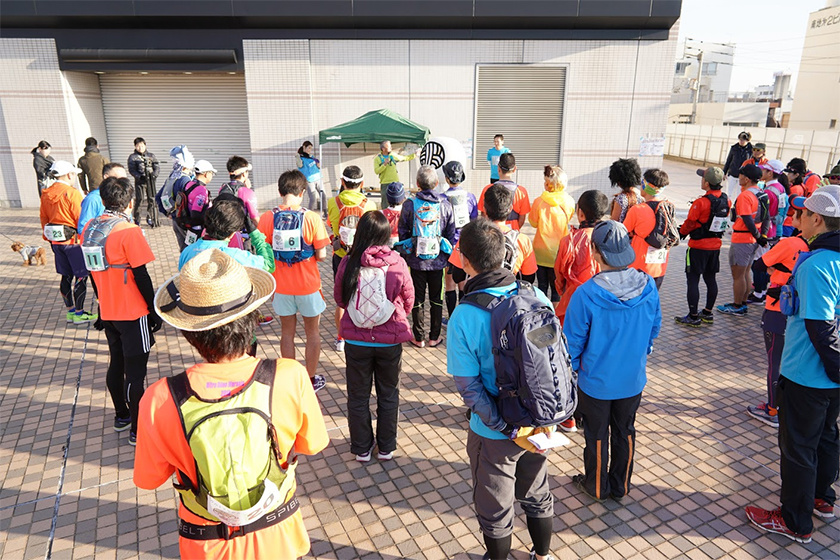 The preliminary event gained the participation of 35 runners, including men and women invited from within and outside of Kagawa.
The starting line bustles with people who come to see the runners and volunteers. 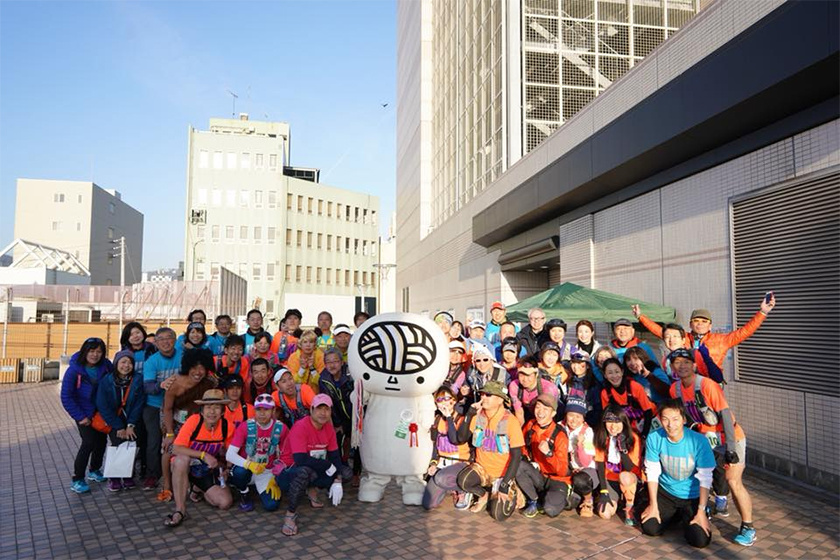 Everyone joins in on the photo shoot before the marathon starts. 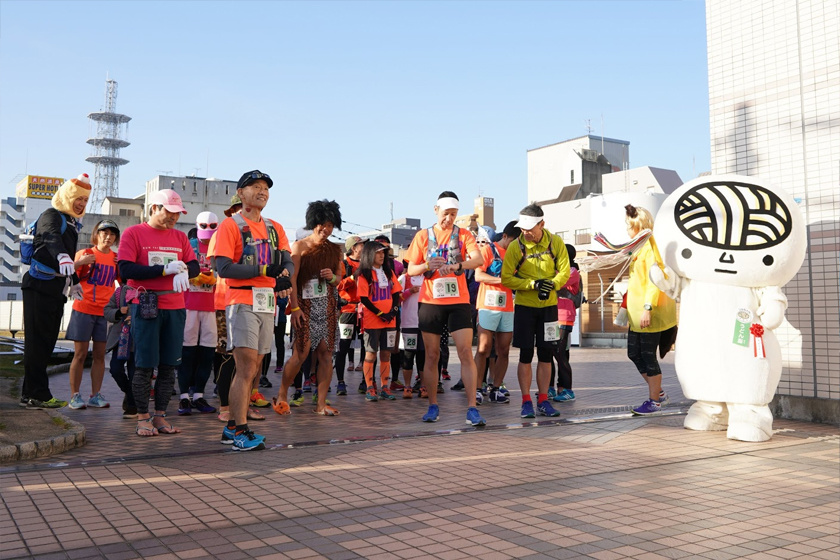 At the signal from Udonno, the honorary chairperson, the runners start. 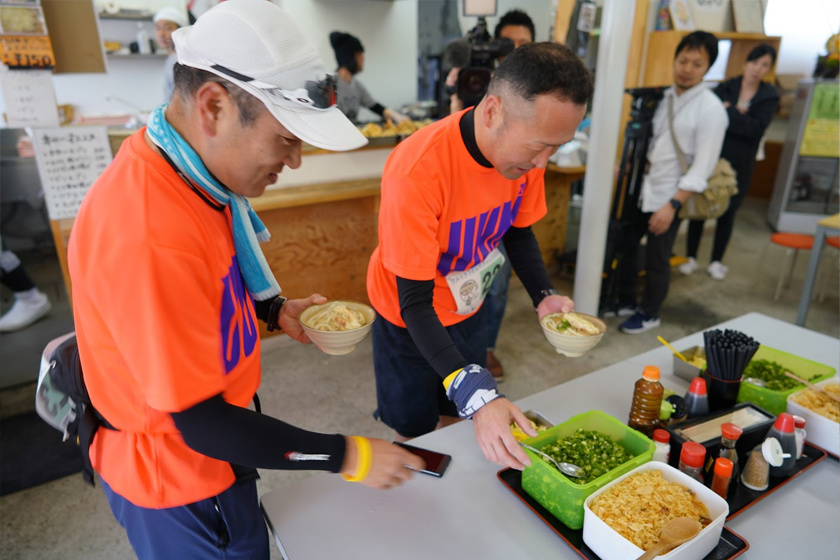 Arriving at the aid station, they receive a bowl of udon and add toppings to suit their taste. 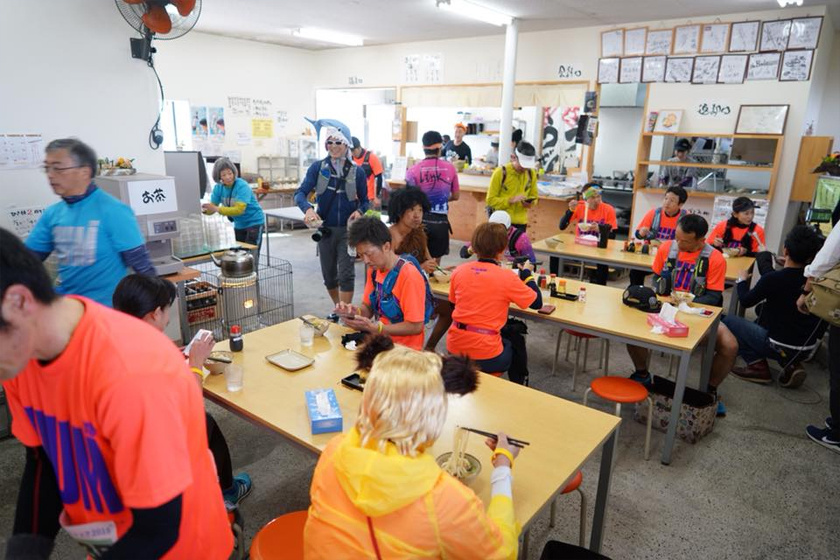 On a closer look, you will see some uniquely-costumed runners. 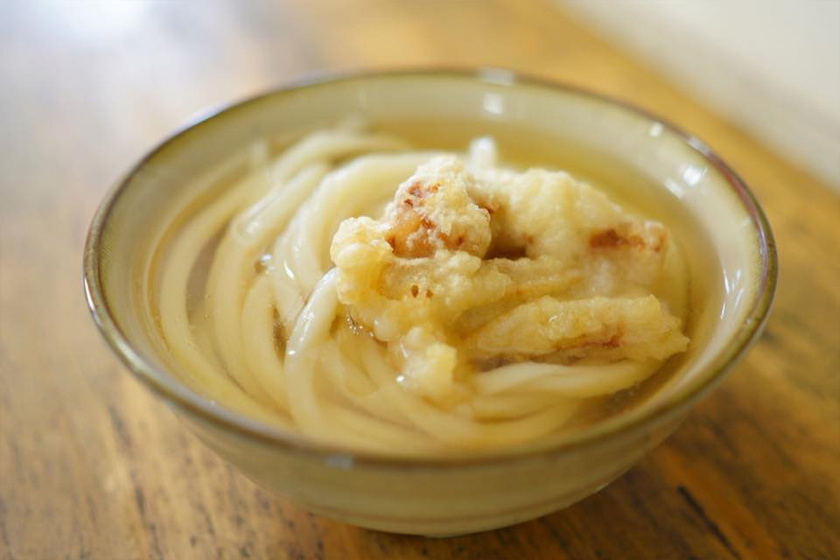 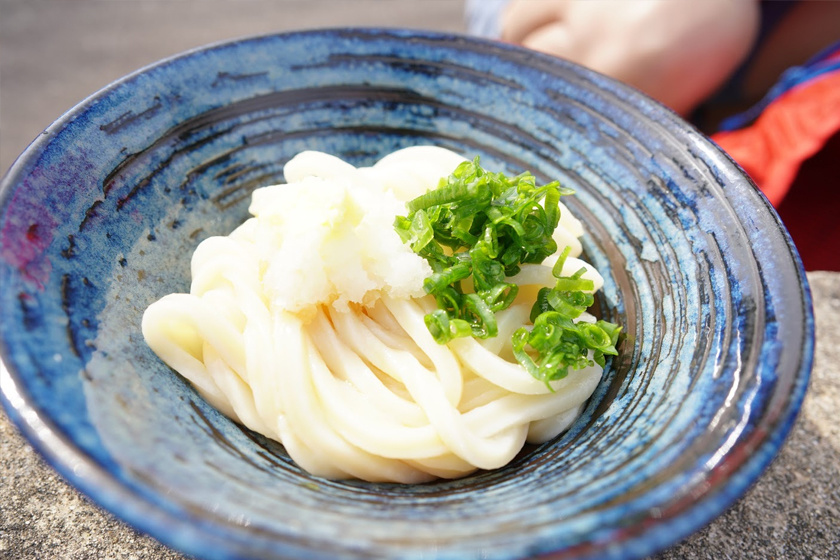 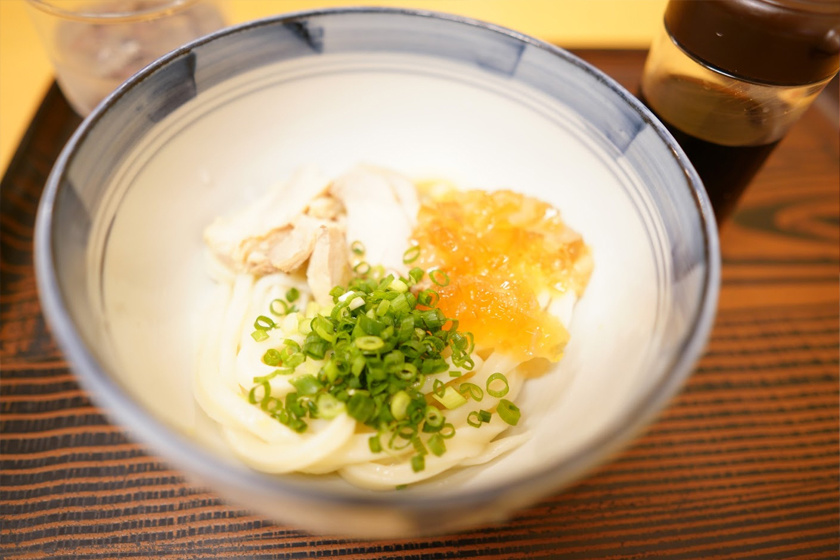 You might be curious about the udon being served. The noodles and broth differ among each stall. The bowls are offered fresh from the vessel when the runners arrive at the water station.
Some stalls have limited items available only during the ultramarathon. 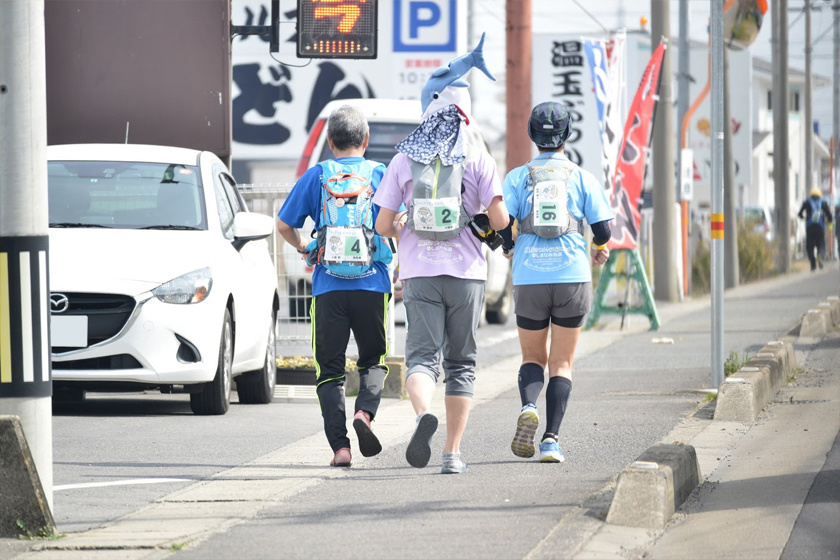 One after another, runners arrive at and leave the aid station. 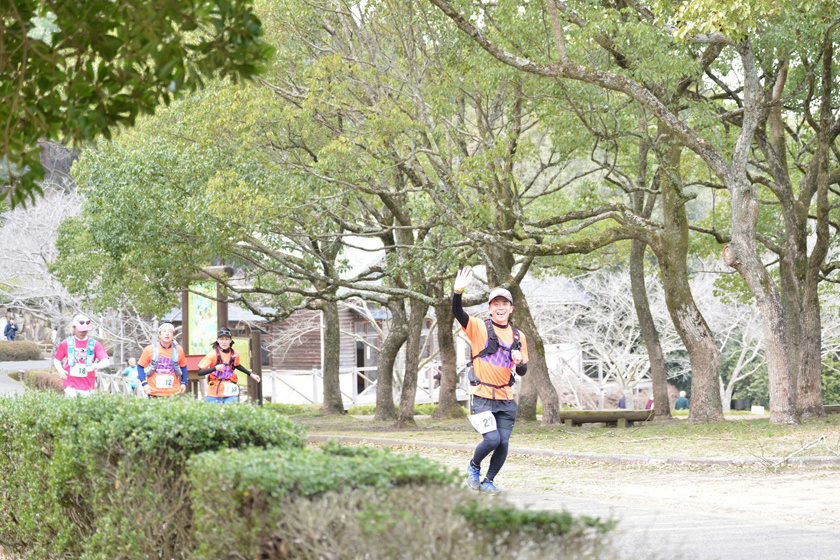 Runners start in central Takamatsu and run southward, and even the countryside and a forest near and at the halfway point, which is located near the 30-kilometer point.
From there, runners head north and aim to reach the peak of Mt. Yashima. 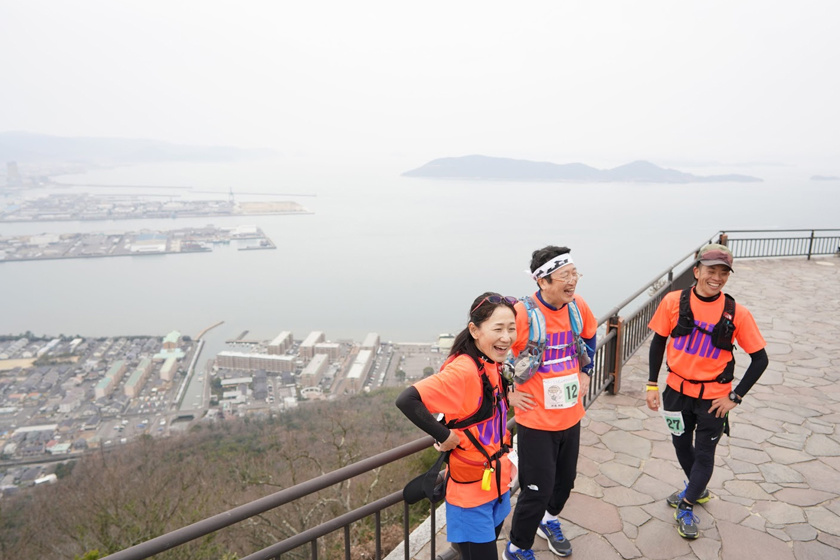 Even if you have already run more than 50 kilometers, you might smile once you catch sight of the magnificent Setouchi, just like this person.
They have a photo shoot before going for the goal. Thirty-two of the 35 male and female participants completed the bowls and course.
Why not participate in Ultra Udon Maranic held in Kagawa, the home of Sanuki Udon Noodles?