Once you experience them, you will never forget these unique festivals in the fishing and farming villages in Kagawa.

These festivals closely associated with the lives of local residents take place in Takamatsu, Kagawa in the summer and fall. Let's find out more about two festivals that we’ve selected: Aji no Funa Matsuri, which has been designated an intangible folklore cultural asset by Kagawa, and Hyoge Matsuri, which Takamatsu has designated an intangible folklore cultural asset. 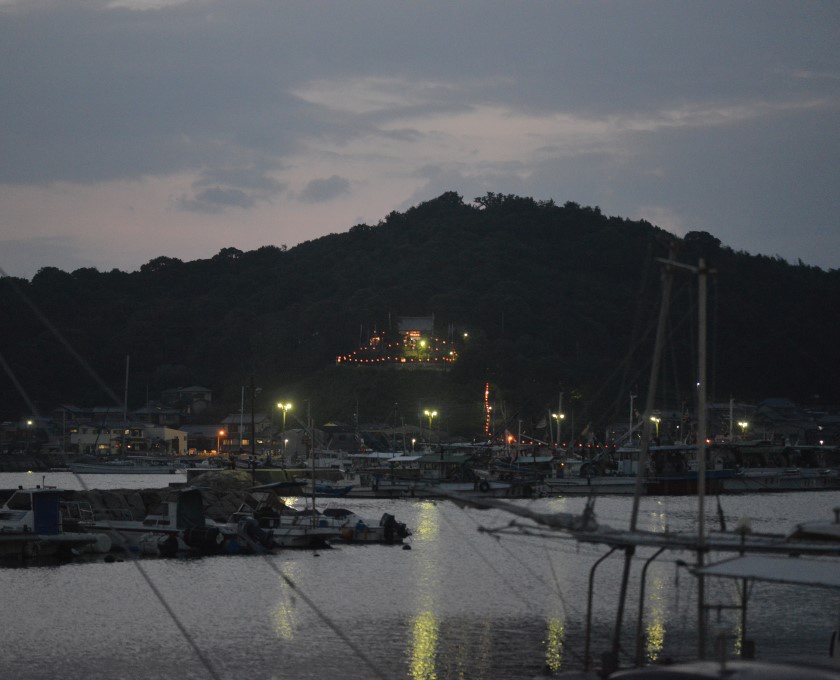 The town of Aji in Takamatsu is known for producing Aji-stone. The area still maintains its old fishing village aesthetic.
▼Aji and Mure

Funa Matsuri, a boat festival, takes place at Aji Oji Shrine on the Friday and Saturday that are closest to the full moon on the 15th day of the 6th month of the traditional lunar calendar.
The locals pray for safety on the water and a bountiful catch during the festival. A sacred palanquin is carried about 2 km to the Otabisho on the opposite shore, where the sacred palanquin is kept during the festival. This historic festival is depicted in Sanuki no Kuni Meisho Zue, a series of pictures depicting sightseeing locations in Kagawa created at the end of the Edo Period. 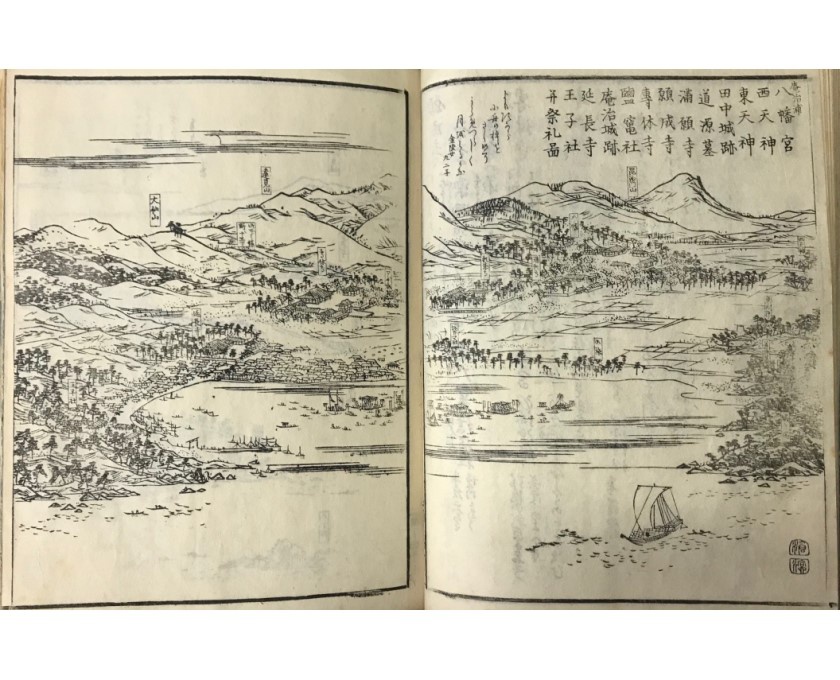 The festival culminates in the Saturday evening celebration. 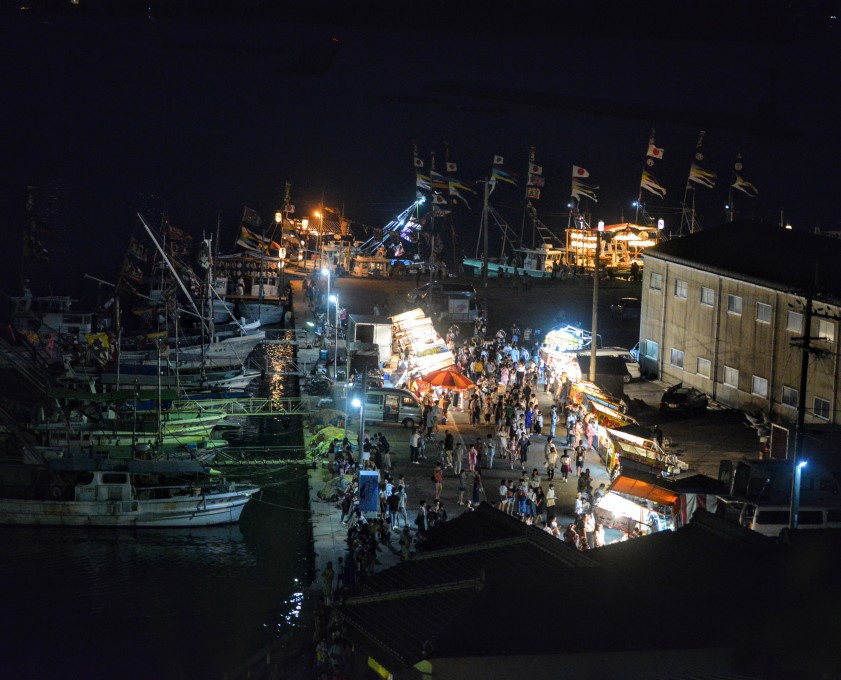 There are night stalls at Enoura, below Oji Shrine, filled with lively atmosphere. 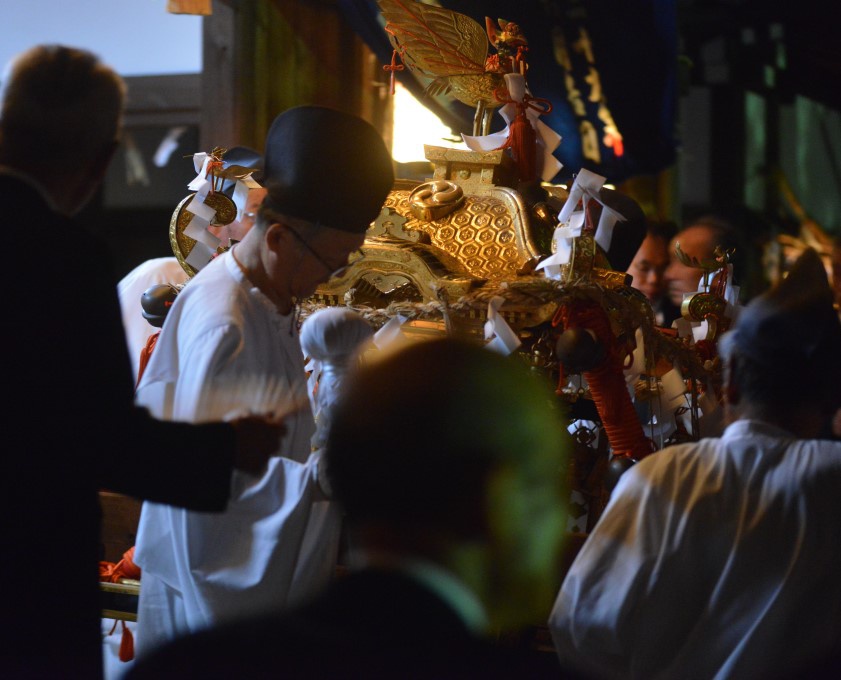 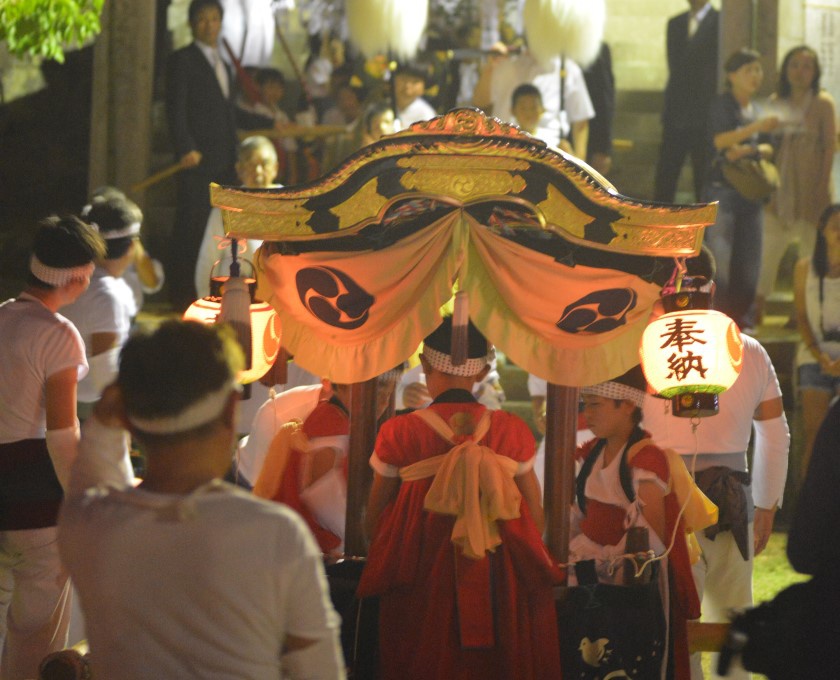 When the festival finishes around 7:30 p.m., the sacred palanquin is carried from the shrine.

You can hear the sounds of danjiri taiko, Ise Ondo, and hayashi calls. The danjiri is pulled by the local young men's association. They exhibit outstanding cohesiveness because of their love for the community.
Danjiri are very large wooden floats that carry taiko drums and are dedicated to a shrine at the Aji no Funa Matsuri. Thirty adults pull a danjiri holding taiko drums and three riders.
Let's watch the festival’s climax! 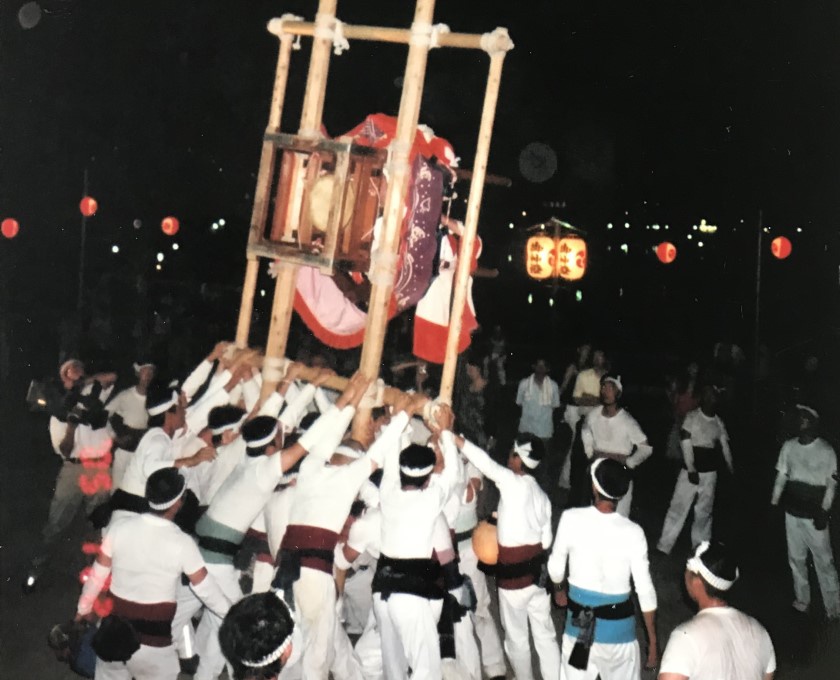 The roof of the danjiri is removed, and the danjiri is rotated while tilted 90 degrees with the riders staying in place. You can't find an acrobatic performance like this anywhere else in Setouchi. 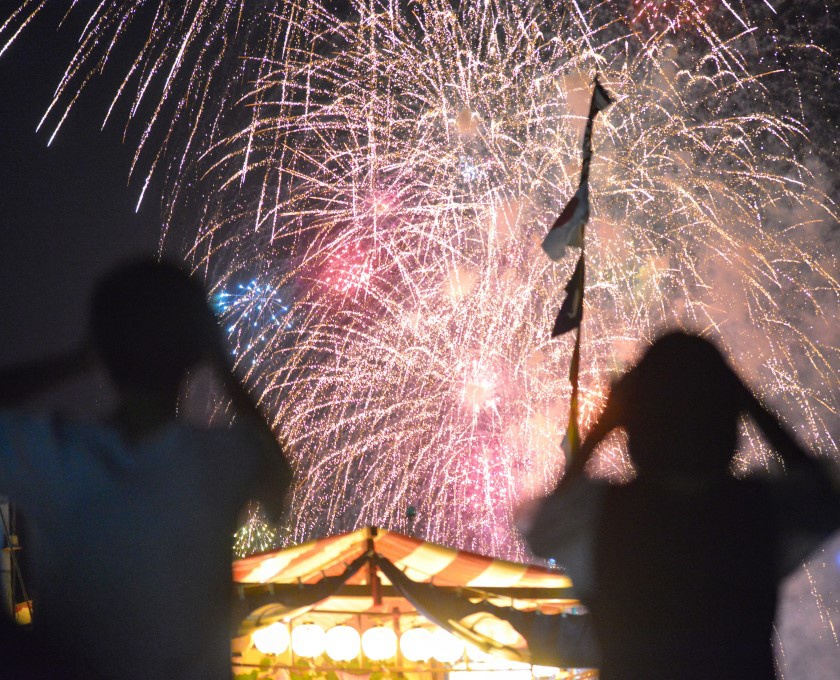 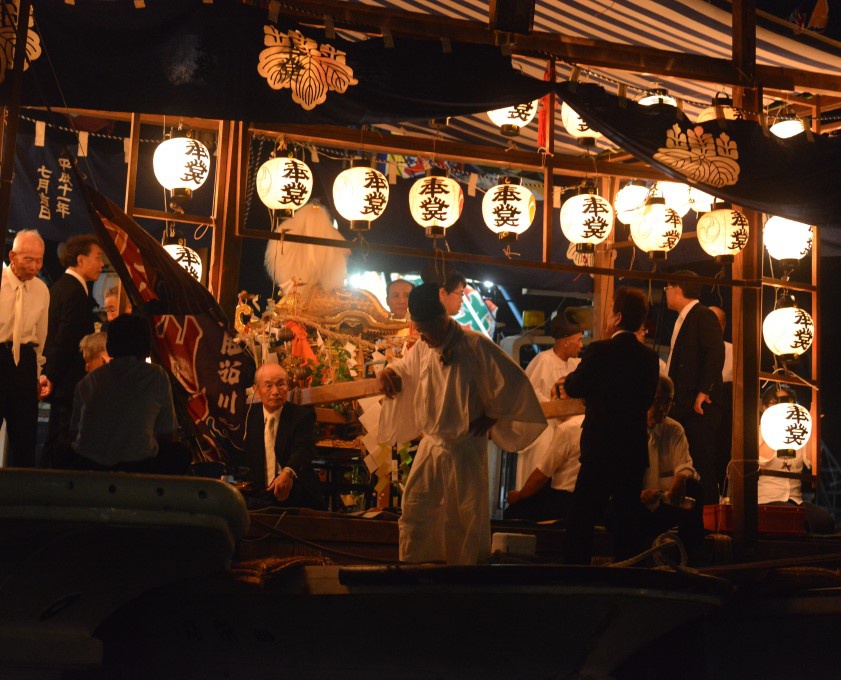 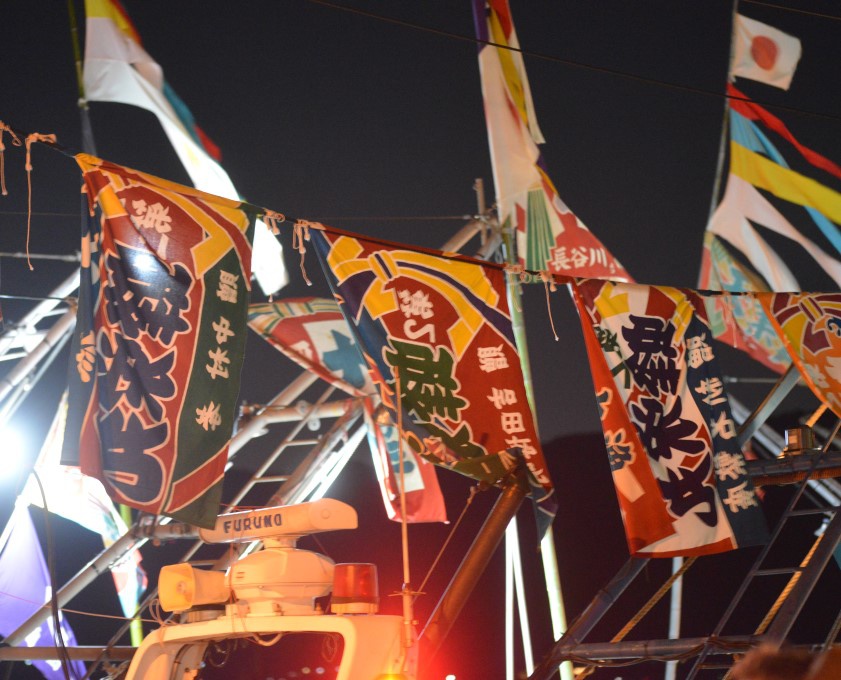 The sacred palanquin is placed on a barge made from three boats to leave for the Otabisho. The boats are decorated with tairyo-bata flags. 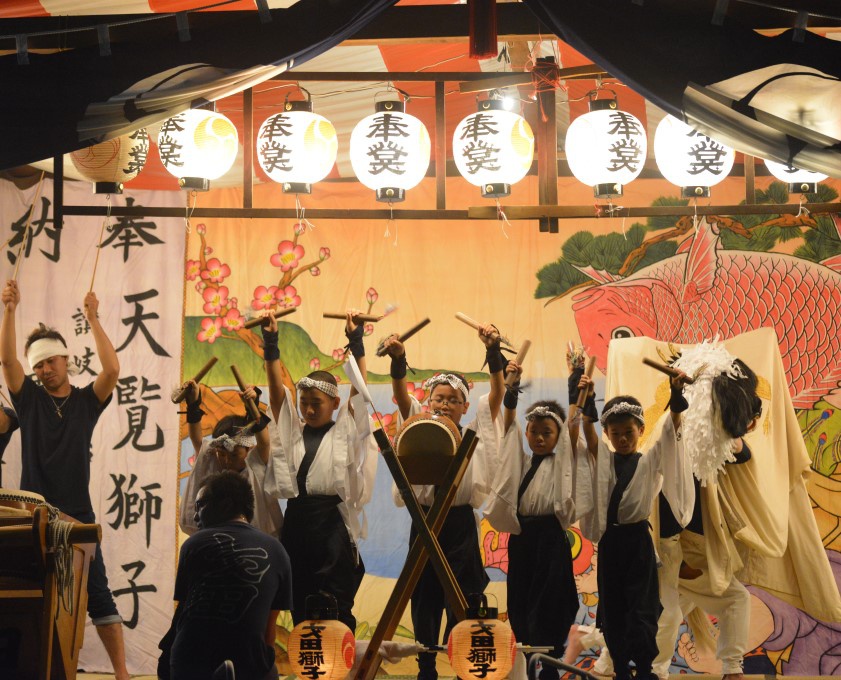 The danjiri and shishi-mai dancers follow the palanquin. Drummers play taiko drums, and dancers perform the shishi-mai, or lion dance. 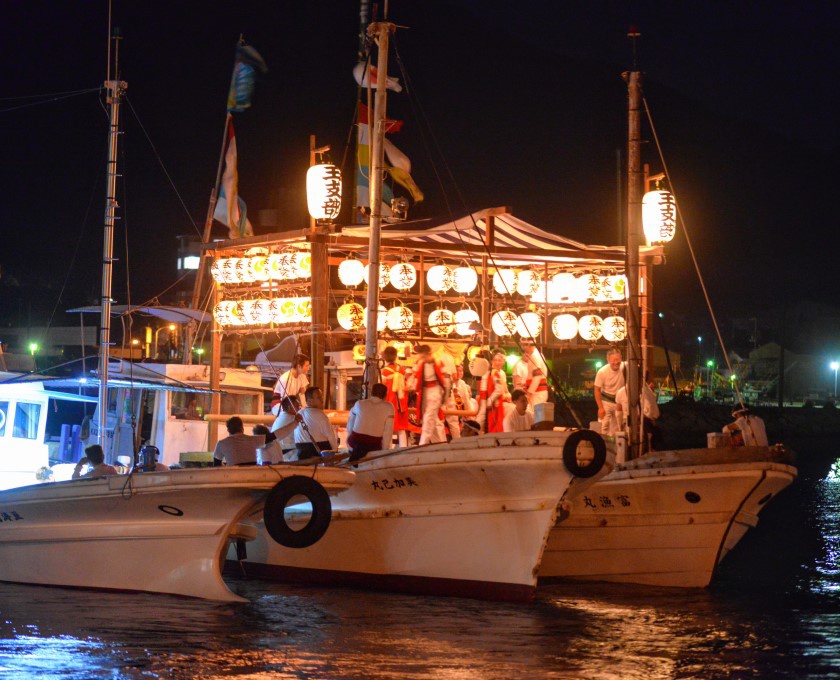 The light of the lanterns on the barge reflects on the ocean surface, creating a fantastic atmosphere.
When the barge arrives at Otabisho, shishi-mai dancers perform until midnight. Then, they return to Oji Shrine on the opposite shore.
Experience the Aji no Funa Matsuri that has developed along with the fishery.

Notice to visitors:
・The schedule of the Aji no Funa Matsuri changes every year.
・The Aji Elementary School is used as a temporary parking lot.
・Car users are recommended to check the closing time in advance and allow plenty of time for travel because congestion is expected. 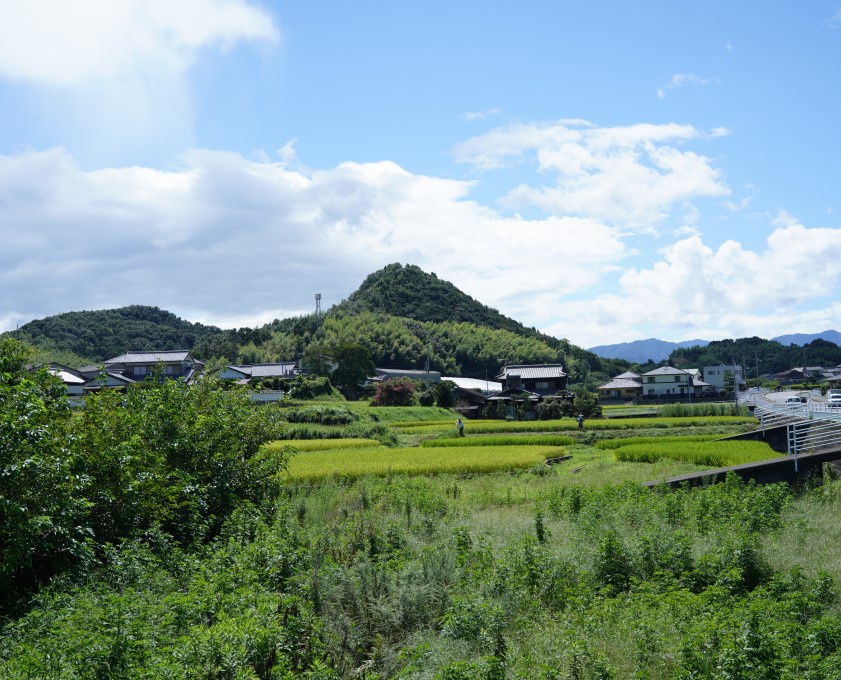 Hyoge Matsuri is held in the Asano district on the second Sunday of September. Asano is a peaceful place notable for its rice paddies, about 30 minutes by car far from central Takamatsu. Hyoge Matsuri is a strange festival that is a rare sight in Japan: people get dressed comically in outrageous makeup and march.
It used to be a small-scale festival within the community of Asano, but recently, the unusual nature of the festival has attracted many tourists and photographers. 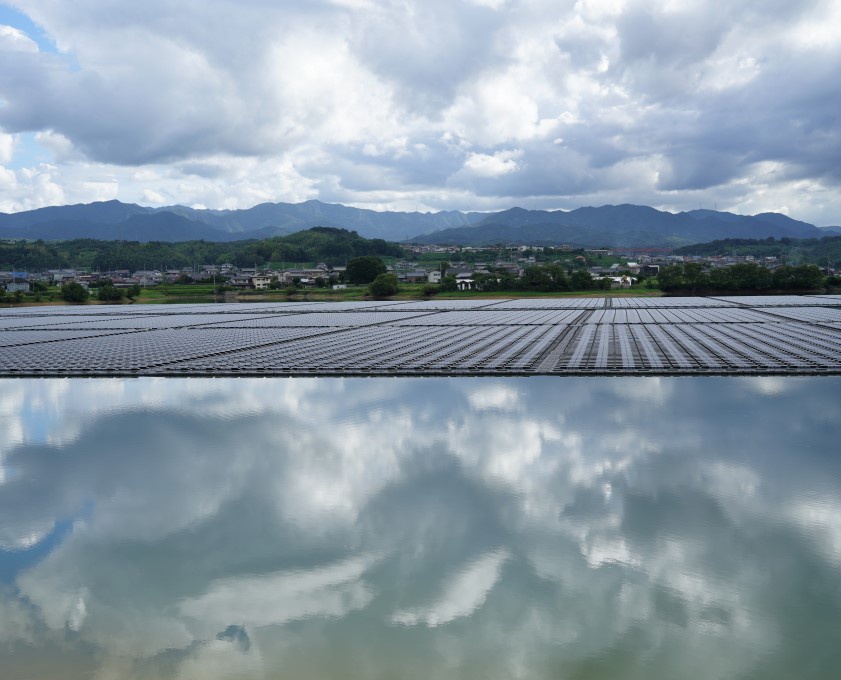 Hyoge Matsuri is a thanksgiving festival for the harvest and Heiroku Yanobe who made a reservoir called Shin Pond.
During the Edo Period, the village’s farmers suffered from a shortage of water. Heiroku made a reservoir that drew water from the Koto River around 1670. 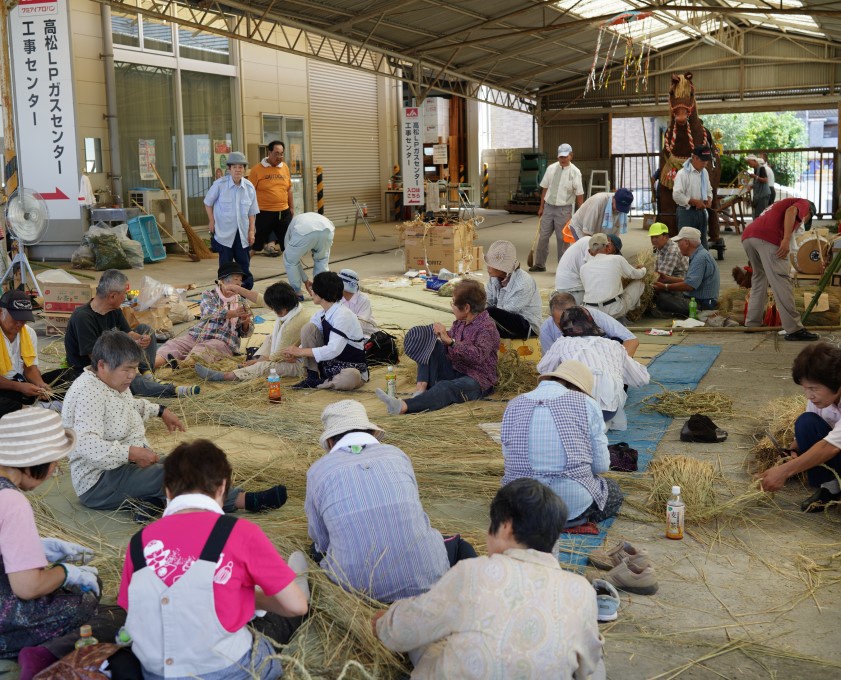 We saw the members of the Kagawa Hyoge Matsuri conservation society several days before the festival.
The tools used in the Hyoge Matsuri are made of crops, straw, and domestic equipment. 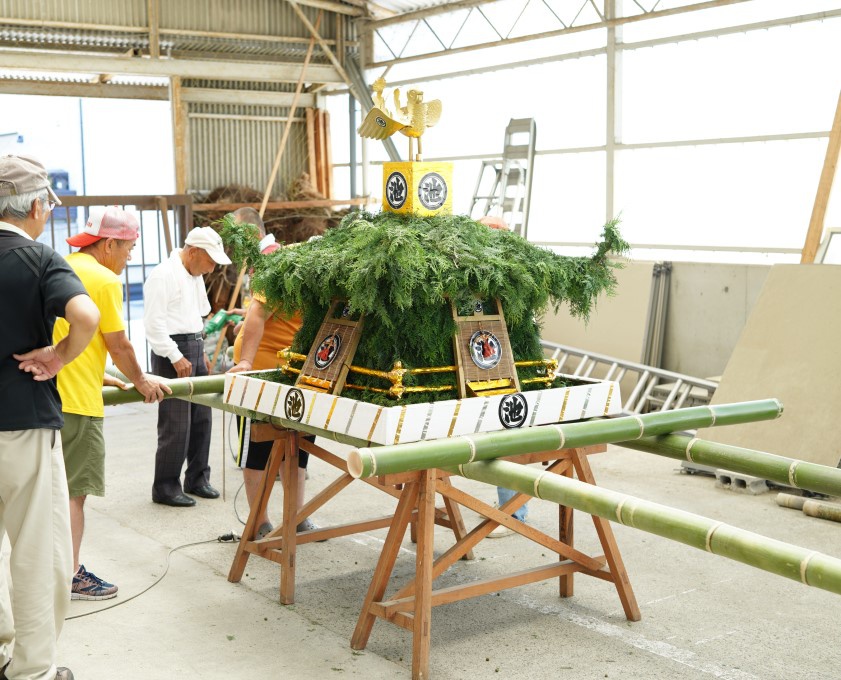 A vivid green sacred palanquin is covered with cedar leaves. The costume of the samurai that accompanies the sacred palanquin is made from fertilizer bags. His topknot is made of palm leaves. He also wears a taro leaf for a hat and a taro stalk instead of a sword. An authentic looking sword guard is made of pumpkin.

On the day of the festival, 150 participants march about 2 km from the training center in Asano to Shin Pond.

The hyoge of the Hyoge Matsuri is from the regional word hyogeru, which means to act comically. 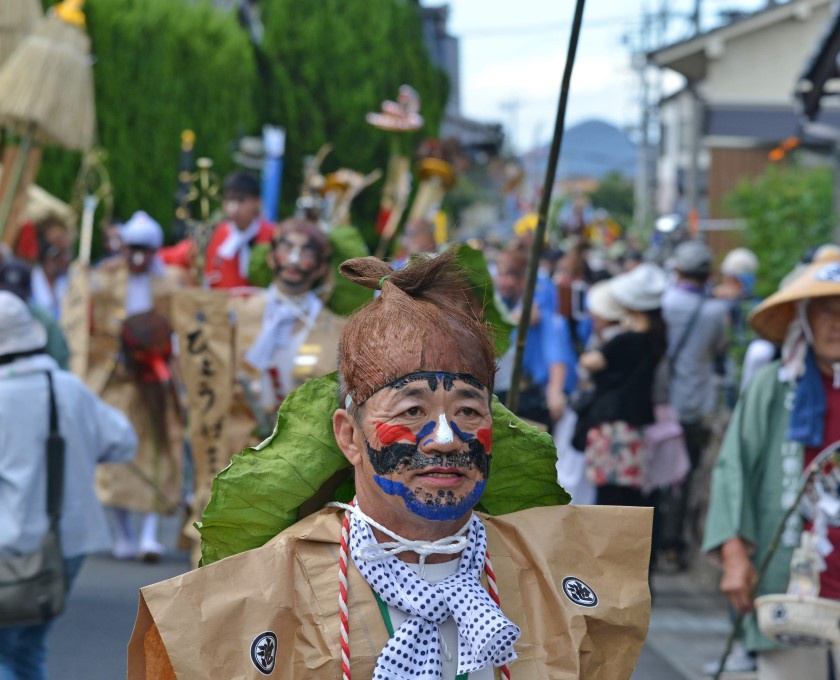 The most interesting part is the makeup. A white line is drawn on the nose, red circles are painted on cheeks, and a mustache and beard are drawn in black. 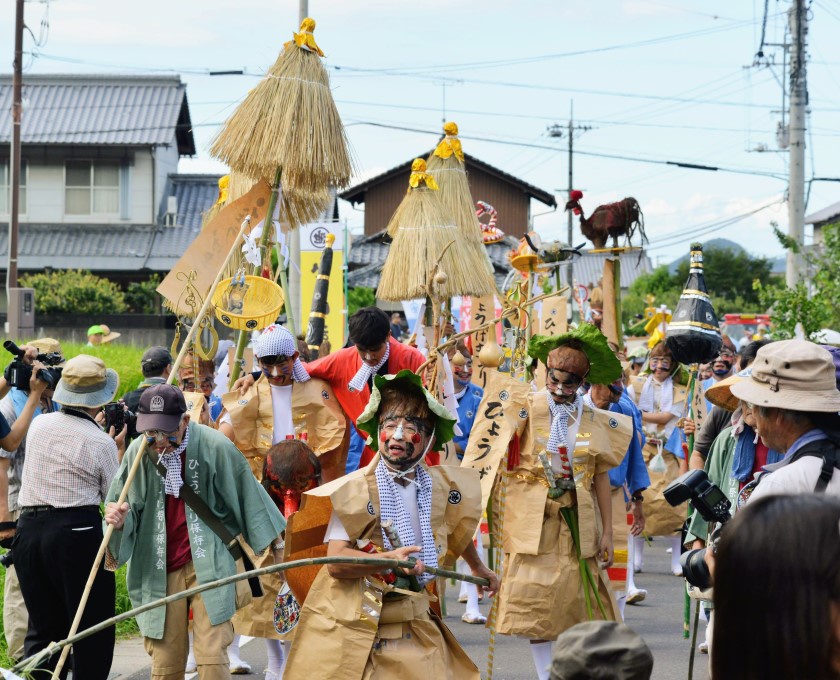 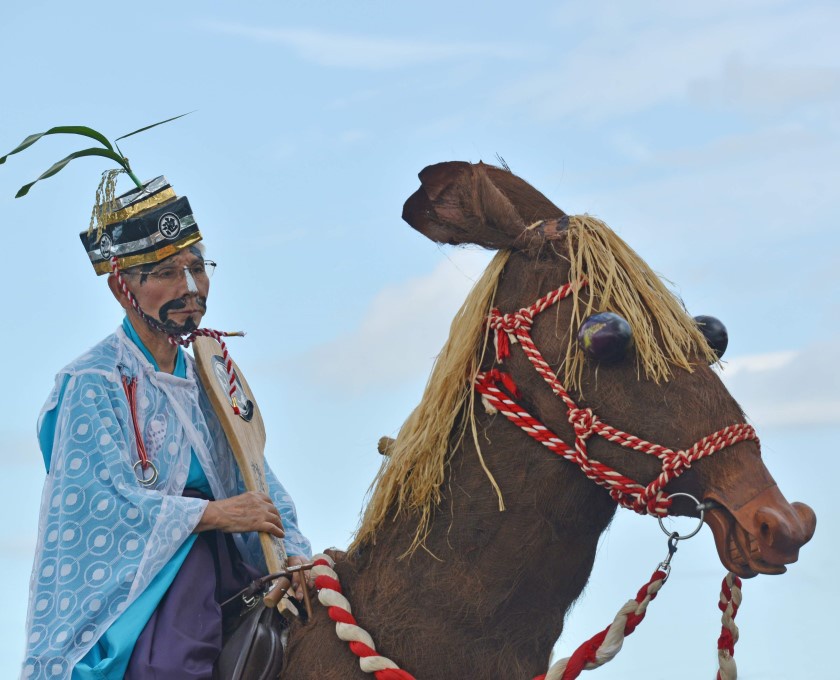 The appearance of the hyoge, the comic dancers, brings smiles to the faces of spectators. The costumes made from fertilizer bags create a beautiful contrast against the rice paddies. Participants may throw their implements, made of straw instead of feather, at each other while marching. 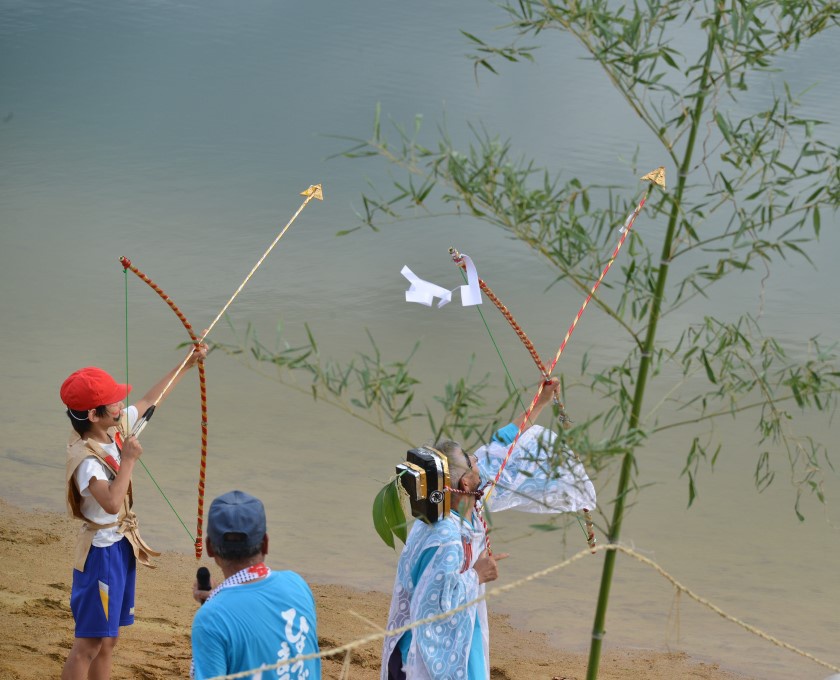 When they arrive at Shin Pond, one of them performs a Shinto prayer, and they throw arrows into the pond to expel evil. 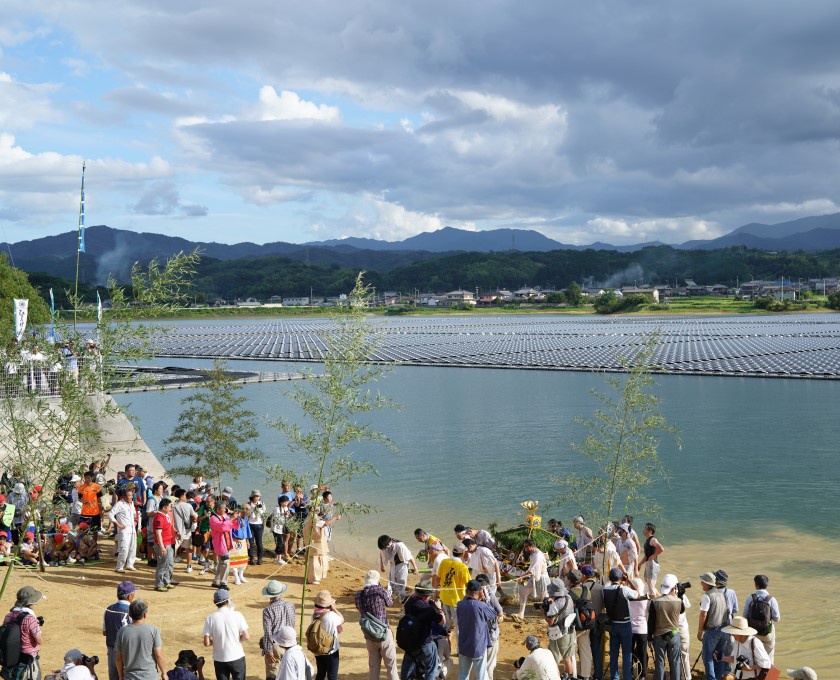 In the festival’s finale, they shout wasshoi while running to the pond while rotating a sacred palanquin in front of the pond to gather momentum.

The local people have conserved the traditions of the Hyoge Matsuri and further developed it creatively for the enjoyment of spectators. Do visit this uniquely strange festival that color the rural landscape.

Notice to visitors:
・During the festival, Kawahigashi Elementary School serves as a temporary parking lot. Visitors can use a free shuttle bus from Kagawa Center that runs between the start and the finish of the parade.

Address
5916-2 Onoshita, Aji-cho, Takamatsu, Kagawa
Date and time
The Friday and Saturday that are closest to the full moon of the 15th day of the 6th month of the traditional lunar calendar Funatogyo (Moving the sacred palanquin): around 7:00 p.m., Saturday