This is the pilgrimage route (ohenro) comprising 88 sacred places in Shikoku, based on the footsteps of Kukai (posthumously called Kobo Daishi, 774-835), the founder of Shingon Sect. The route starts at Kotoden Yashima Station, goes north and leads to Yashima Temple, which is the 84th holy temple on Yashima. It is easier to climb than other mountain trails. The path is well paved with stone pavement and stairs to facilitate walking. There are many historic and spiritual spots as well as other interesting sites dotted along the route. It is perfect for casual trekking. Take an hour-long walk on the pilgrimage route to experience the season. 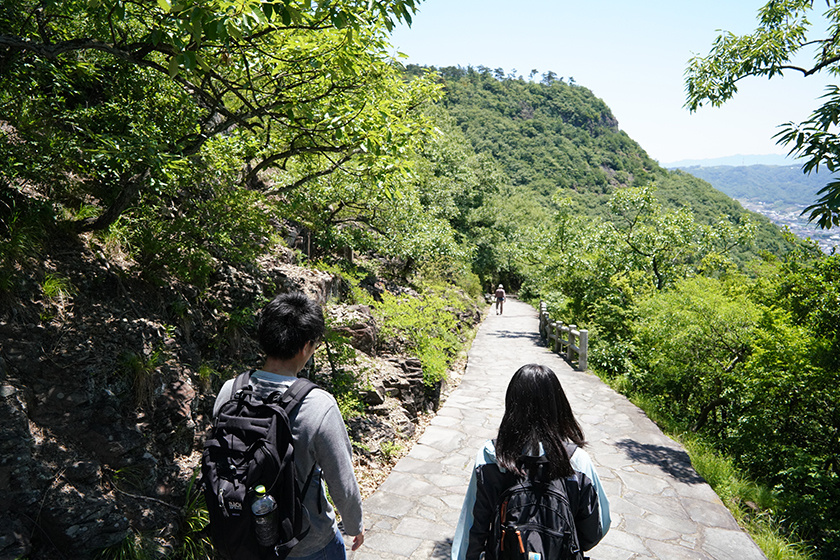 Access the Yashima area from Yashima Station on the Kotoden or JR line. Follow the signs installed in the residential district to enter the pilgrimage route. Then, find a steep slope surrounded by greenery. 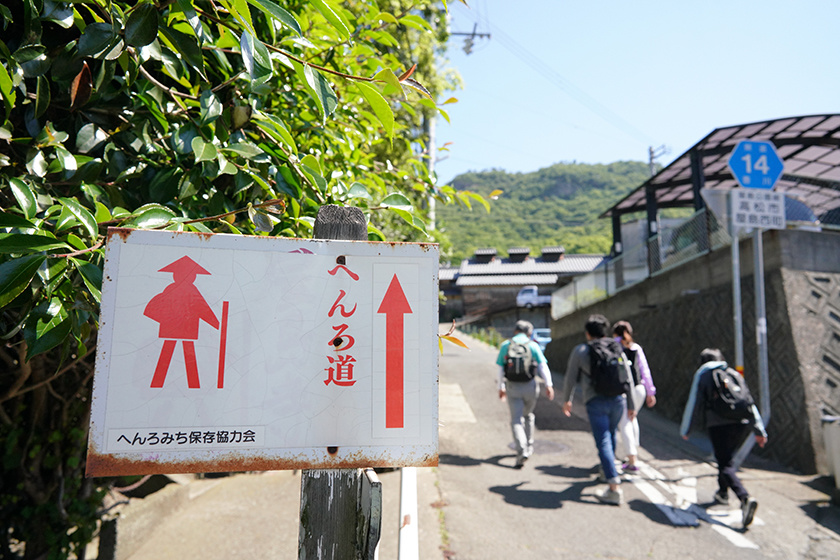 "You have to go up a steep slope first, but it will become a gentle slope after a while," said Mr. Koichiro Oka, chairperson of Genki Yashima o Tsukurokai, with a cheerful voice. 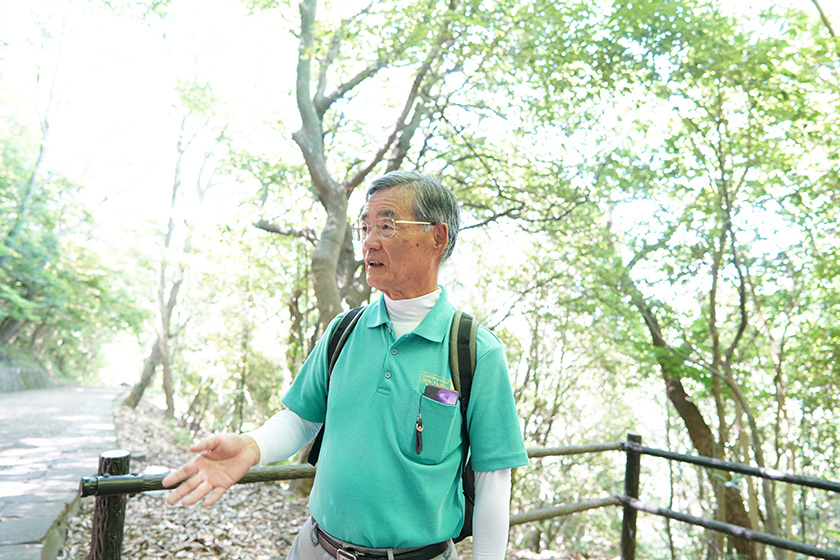 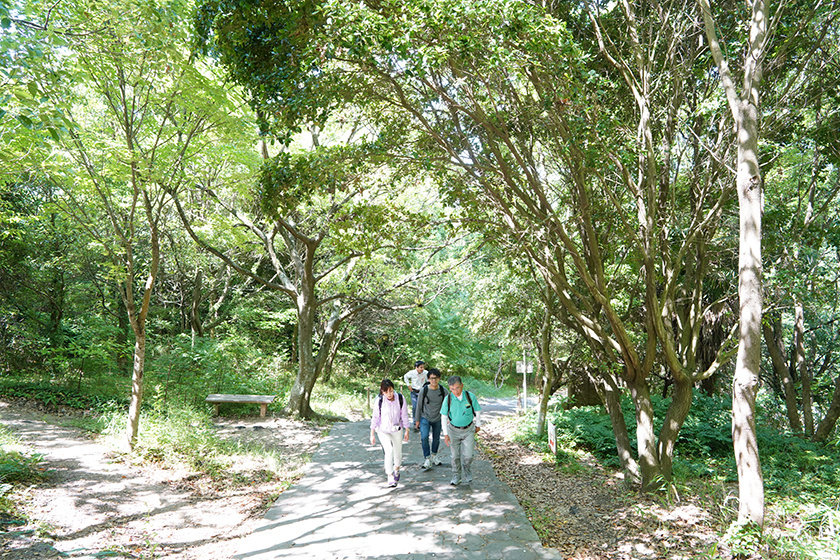 "The pilgrimage route has some historic sites related to Kukai and Saigyo Hoshi (1118-1190), a poet late in the Heian period. Let's look at the sites on the way," said Mr. Oka, while going up the path lined with trees.

Kajisui, the sacred spring water, gushes at the top of the steep slope that continues from the entrance of the pilgrimage route. 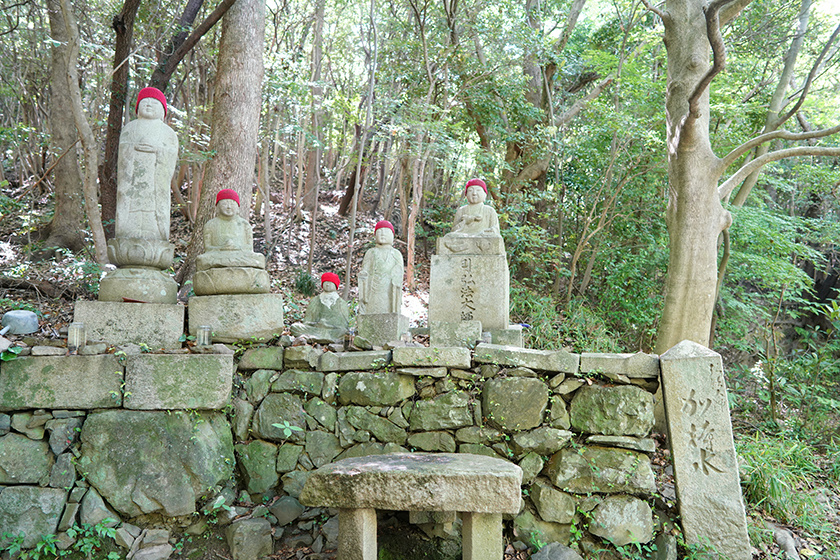 Legend has it that Kukai made water gush between the rocks by praying when he was thirsty and could not find any spring water. The water has never stopped flowing, even when other ponds and wells have run dry.
(The spring water is not for drinking today.)

There are Sanskrit characters on the monument next to the stone Buddha statues. They are said to have been written by Kukai. 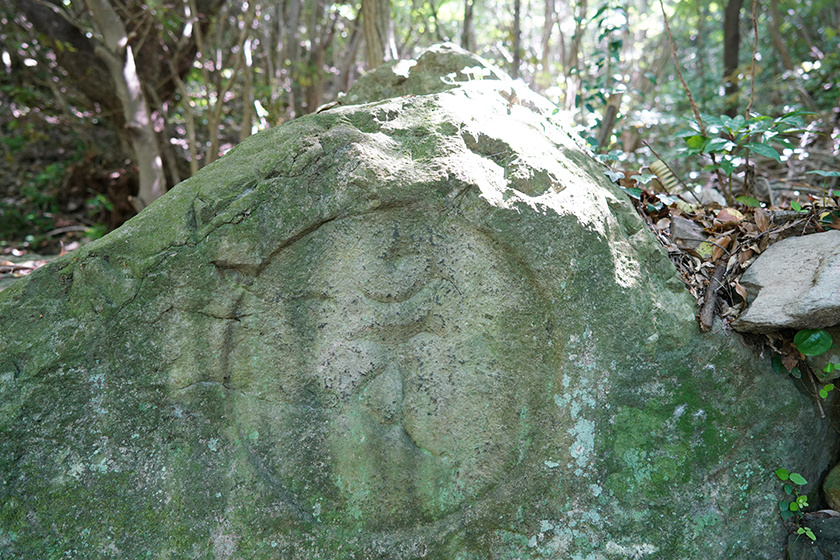 The characters mean a-un for a-un no kokyu. A in a-un is the first character in the Sanskrit alphabet. Un is the last character. The former symbolizes the beginning of universe, and the latter means totality of the universe. A-un no kokyu means the behavior of people acting perfectly in sync.

You may feel a kind of affinity for the famous priest of high virtue who was tired from ascending the slope and rested. 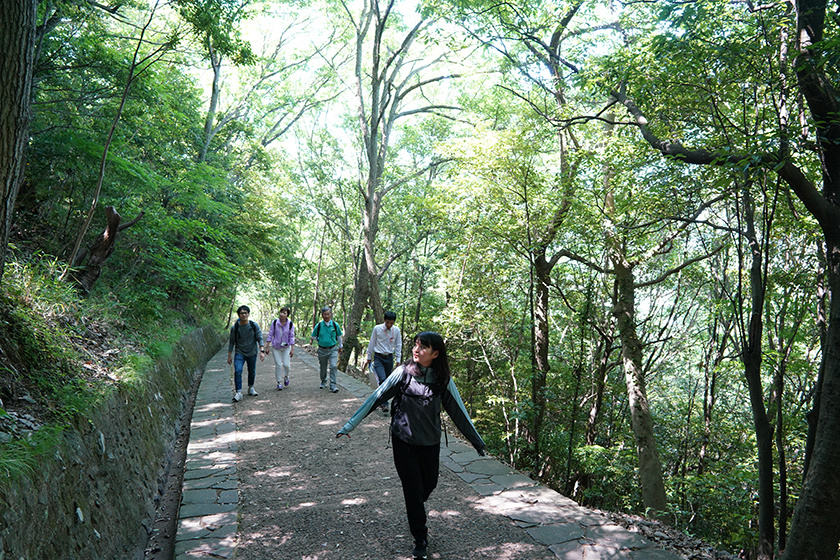 The pilgrimage route is just like a green tunnel. It is fully covered by broadleaf trees called ubame oak. Cool wind blows in the bowery even in summer.

The second highlight is Kuwazu no Nashi, which literally means inedible pear. The site is related to one of the legends of Kukai. 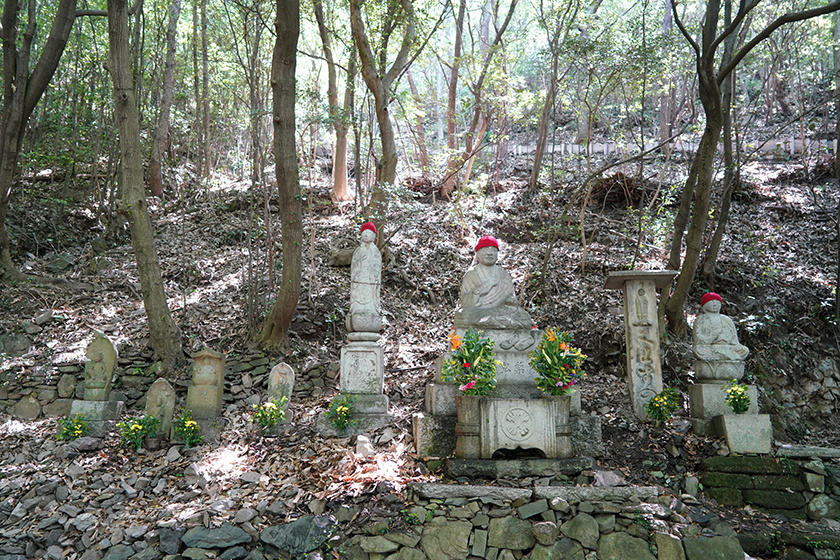 Kukai spotted a pear tree bearing fruit that looked nice when climbing Yashima. He asked the owner of the tree for a pear. The owner lied and said that the pears were not for eating. The tree is said to have stopped bearing fruit from the following year onward. 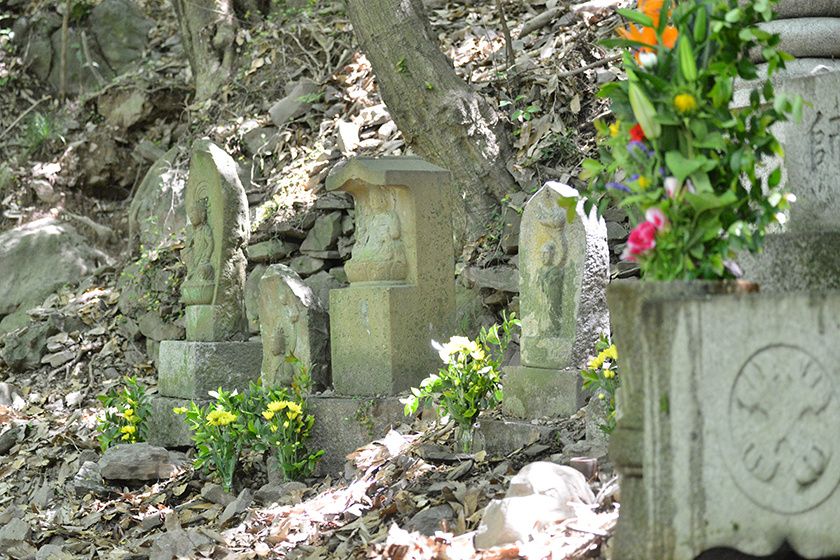 There are other small jizo statues that protect travelers on the route. 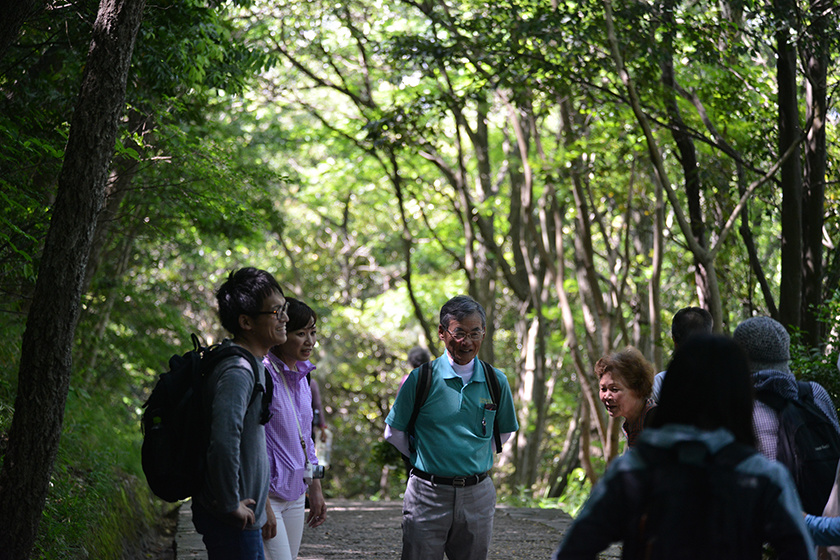 The local volunteers offer flowers before them. You will see that people look after them carefully.

The summit is over there. We found a strangely shaped rock that looks like a huge turtle shell. 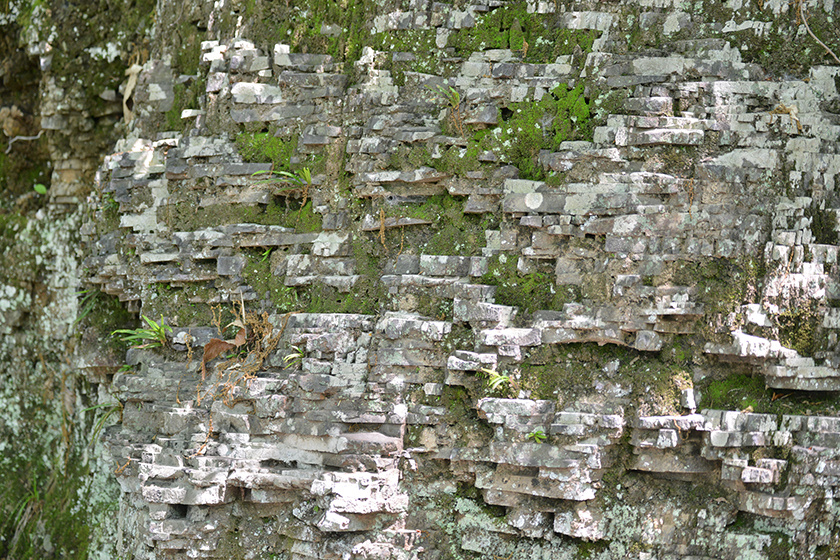 The strangely shaped rock is called Tatami (a "tatami" is a mat made of straw and rush and is used in traditional Japanese-style rooms)-ishi, characterized by regular cracks on a sheet-shaped rock. 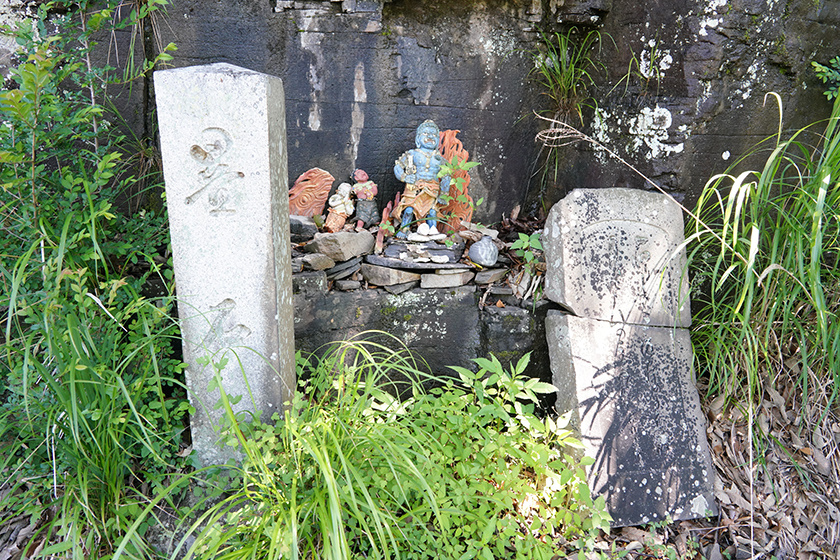 There is a monument engraved with the waka poem composed by Saigyo Hoshi when he went to Yashima Temple to pray. The cracked monument is difficult to read today, but it says: Yadorishite Kokoni Karine no Tatami-ishi Tsuki wa Koyoi no Nushi Narikeri (I sleep next to Tatami-ishi here, the moon is the master of this night).

The route ends soon after the three historic sites. 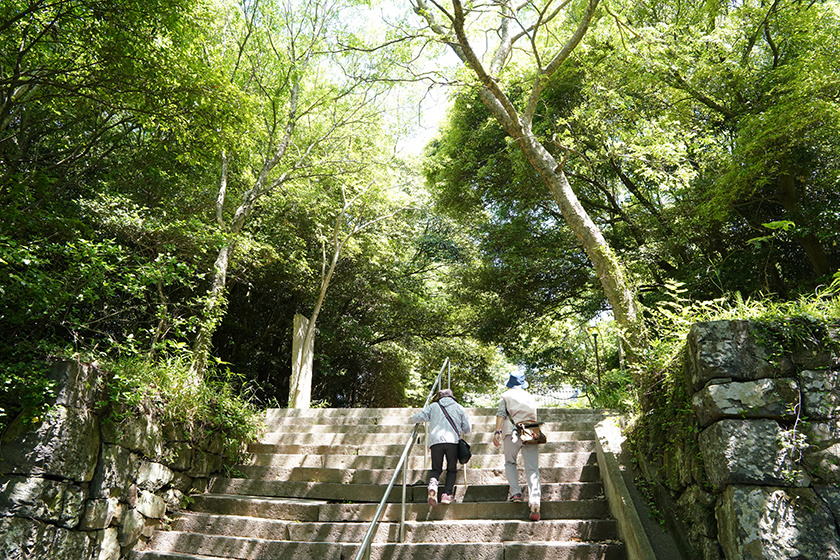 The gate called Sanmon (Niomon Gate) of Yashima Temple appears after you ascend the stairs in the end. 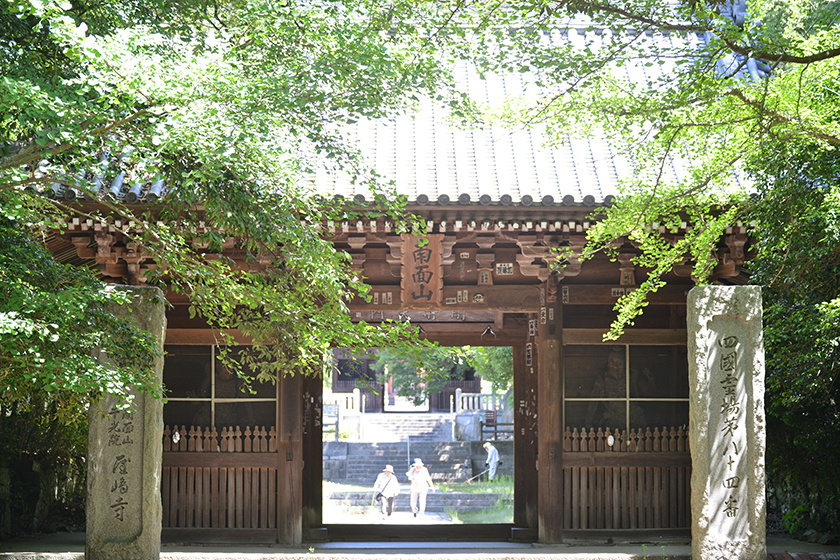 After passing the gate, you will pass Shitenno Gate and the main temple. If you come by car or bus, use Higashidaimon Gate. It is surely a privilege for the people coming on foot to follow the regular pilgrimage route by entering from Sanmon Gate to directly reach the main temple. 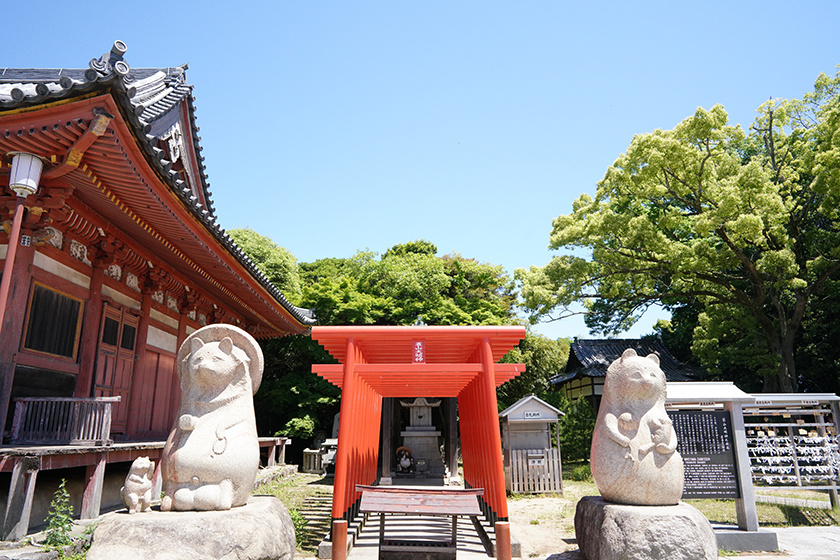 Next to the main temple, Minoyama Daimyojin enshrines Tasaburo Tanuki, one of the three greatest raccoon dogs of Japan. It is known as the model for a character in a movie by Studio Ghibli. Many tourists come to meet Tasaburo Tanuki to pray for blessings, such as family happiness and matchmaking.

After praying at Yashimaji Temple, go to Shishi no Reigan observation deck on the western side. 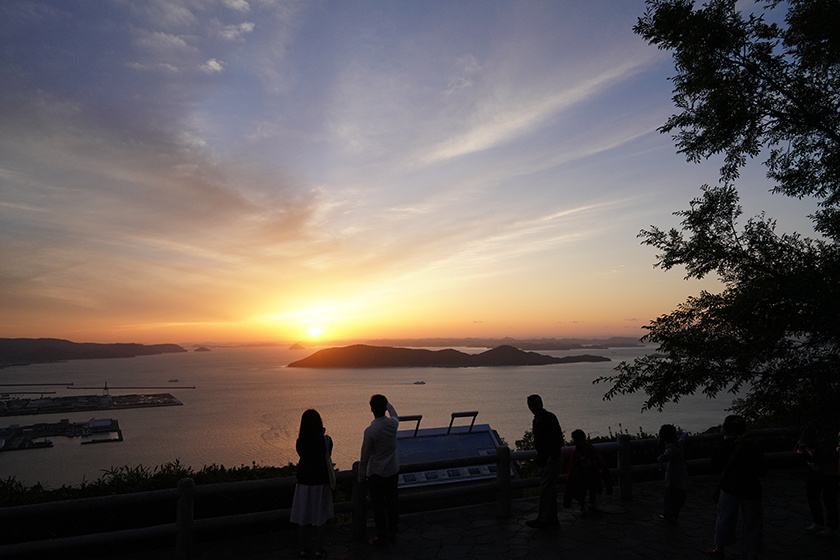 The observation deck with an altitude of 290 m is a spot overlooking the beautiful landscape of many islands in the Seto Inland Sea and Takamatsu. The panoramic view will heal your fatigue from the pilgrimage route. 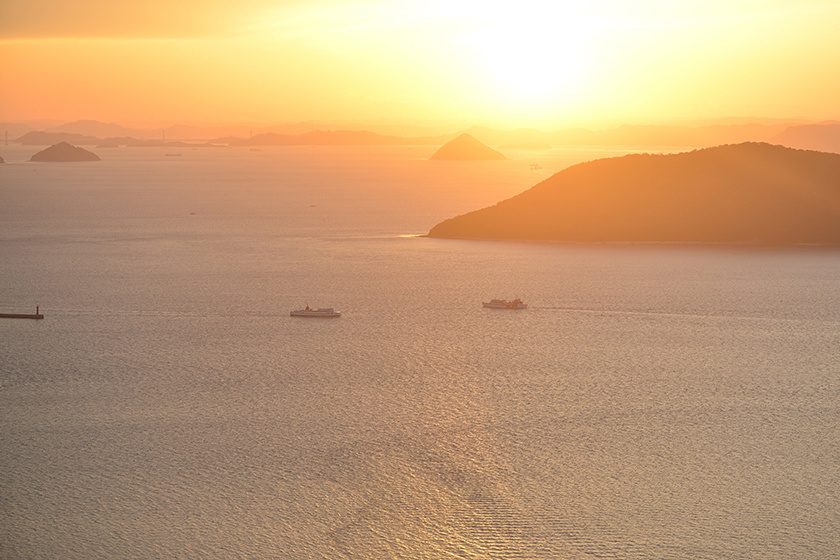 The pilgrimage route in Yashima is a trekking road surrounded by nature and where you can stop at the sites related to Kukai. Join the pilgrims and local people walking along it. 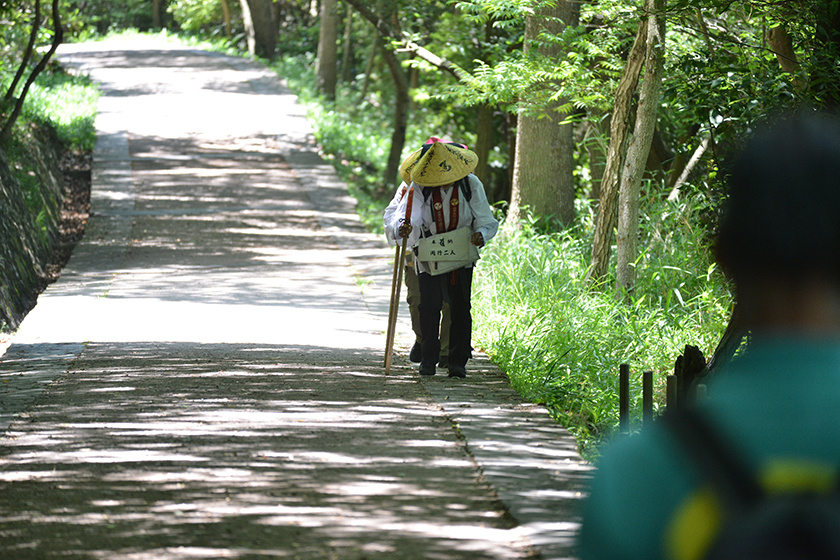