Wander into the Shikoku of Bygone Days, at Shikokumura Museum

The entire Yashima area is a historical site, a battlefield that was the scene of one of the great battles of the Genpei War (a conflict that took place between the Taira (Heike) and Minamoto (Genji) clans during Japan's Heian Period), and is visited by many tourists. Situated near to the Yashima Driveway entrance is Shikoku’s only open-air museum, which is packed with interesting attractions.
The collection of 31 buildings is composed of houses and ruins transported to the site from all over Shikoku, and includes several national and/or prefectural designated items of cultural heritage. The museum’s exhibits convey to visitors what life in Shikoku was like in the past, through buildings, farming equipment, household tools and other assorted artefacts. The village is also rich in greenery, with an extensive array of seasonal flowers that can be seen throughout the year. Visitors can enjoy walking through it, and experience feelings akin to those felt when forest bathing.

As the museum buildings are scattered across a sloping hillside, visitors are advised to wear comfortable walking shoes.

Here, we introduce some of Shikokumura Museum’s recommended spots for walking, seeing and feeling the history of Shikoku. 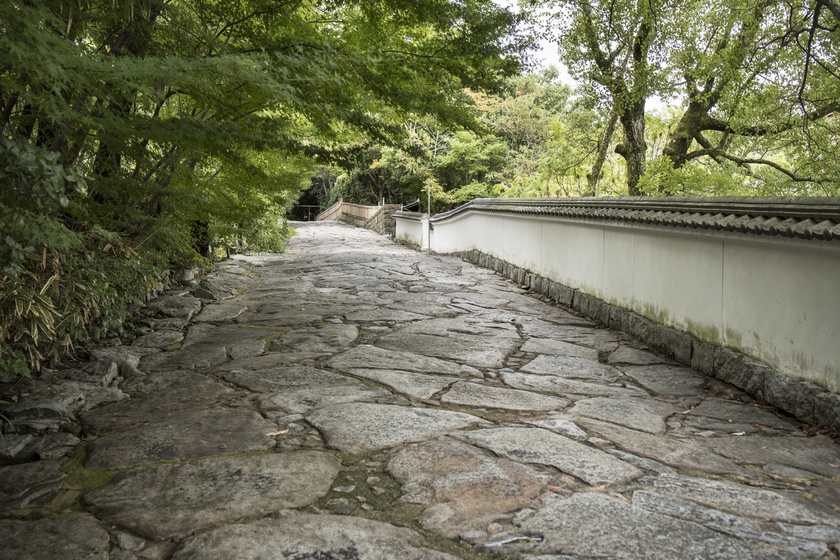 The gently sloping hill that leads from the entryway into Shikokumura Museum itself was designed and created by sculptor Masayuki Nagare, and carries the name Nagarezaka (which literally means “flowing hill”). The Aji district—which is situated next to Yashima—is a world-famous stone producing area; to such an extent that Mr. Nagare too has an atelier there. The gentle sunlight shining through the trees onto the dynamically-laid granite stone slabs—cut from a nearby quarry—makes this a truly beautiful place. 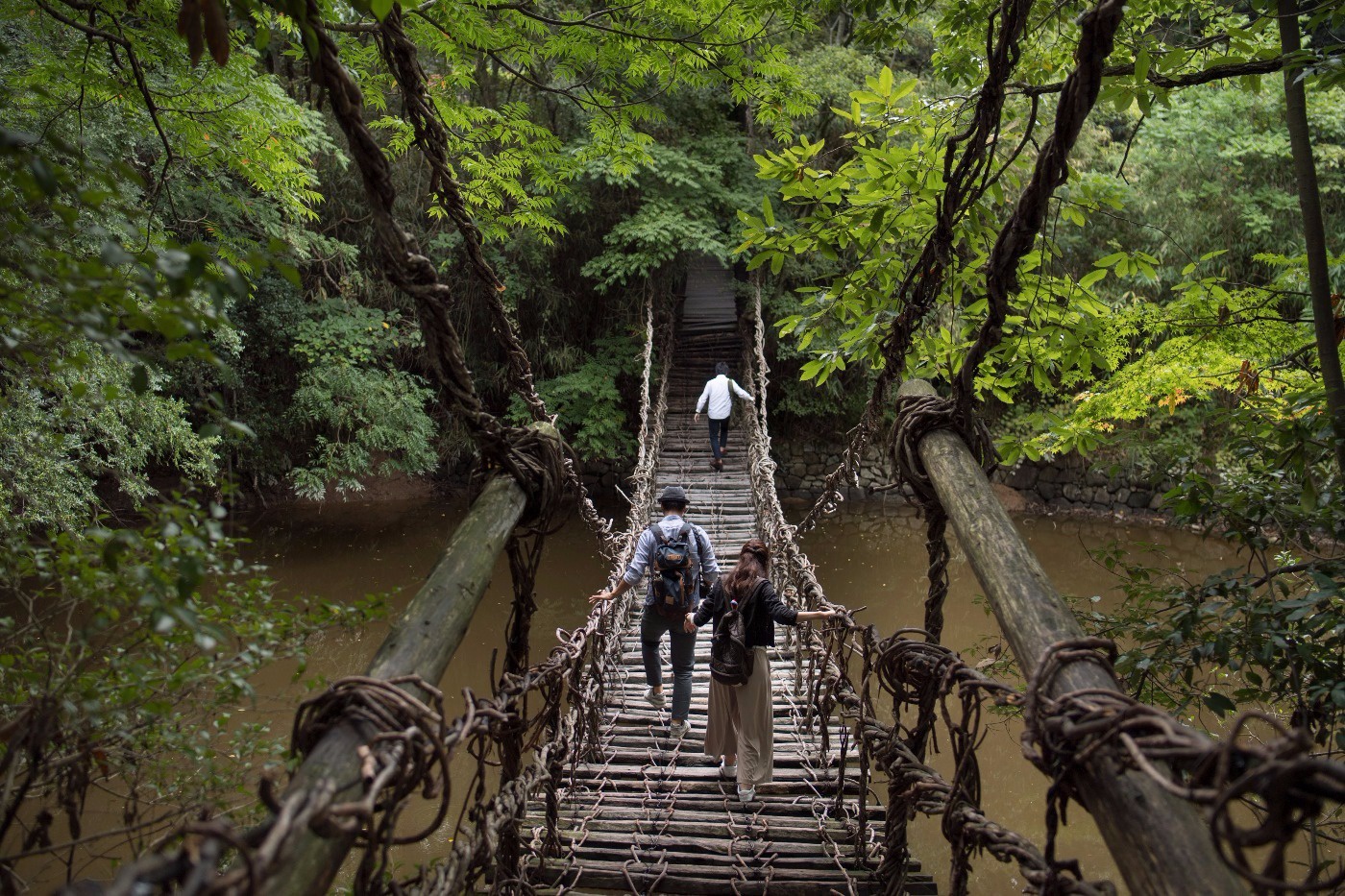 The first we reach as we head into the museum is a truly thrilling suspension bridge; a reconstruction of the Kazurabashi bridge at Iya in Tokushima prefecture. The bridge is made from crawling vines and reinforced with wires, but still allows visitors to see the green-colored water surface through the gaps at their feet as they cross, and often induces a cold sweat as the bridge sways from left to right with every advancing footstep.
As we finally made it across to the other side of the bridge, museum curator greeted us with a smile. “Welcome to Shikokumura Museum!” Looking up, we see that we are in a place that is very different from the bustling and liveliness we have seen so far. We are up in the hills, with the sound of birdsong resonating all around us.
American-born scholar (and writer) of Japanese literature Donald Keane wrote that, as you cross this bridge, it feels as if you are about to step into a domain that is distantly detached from everyday life. The Rural Kabuki Stage, which was transferred to the museum from the island of Shodoshima, was once used for rural Kabuki performances, with the local people participating as actors. It is said to have been built during the late Edo period, and is still used today, as a place for children’s Kabuki performances and exhibitions of contemporary works of art. 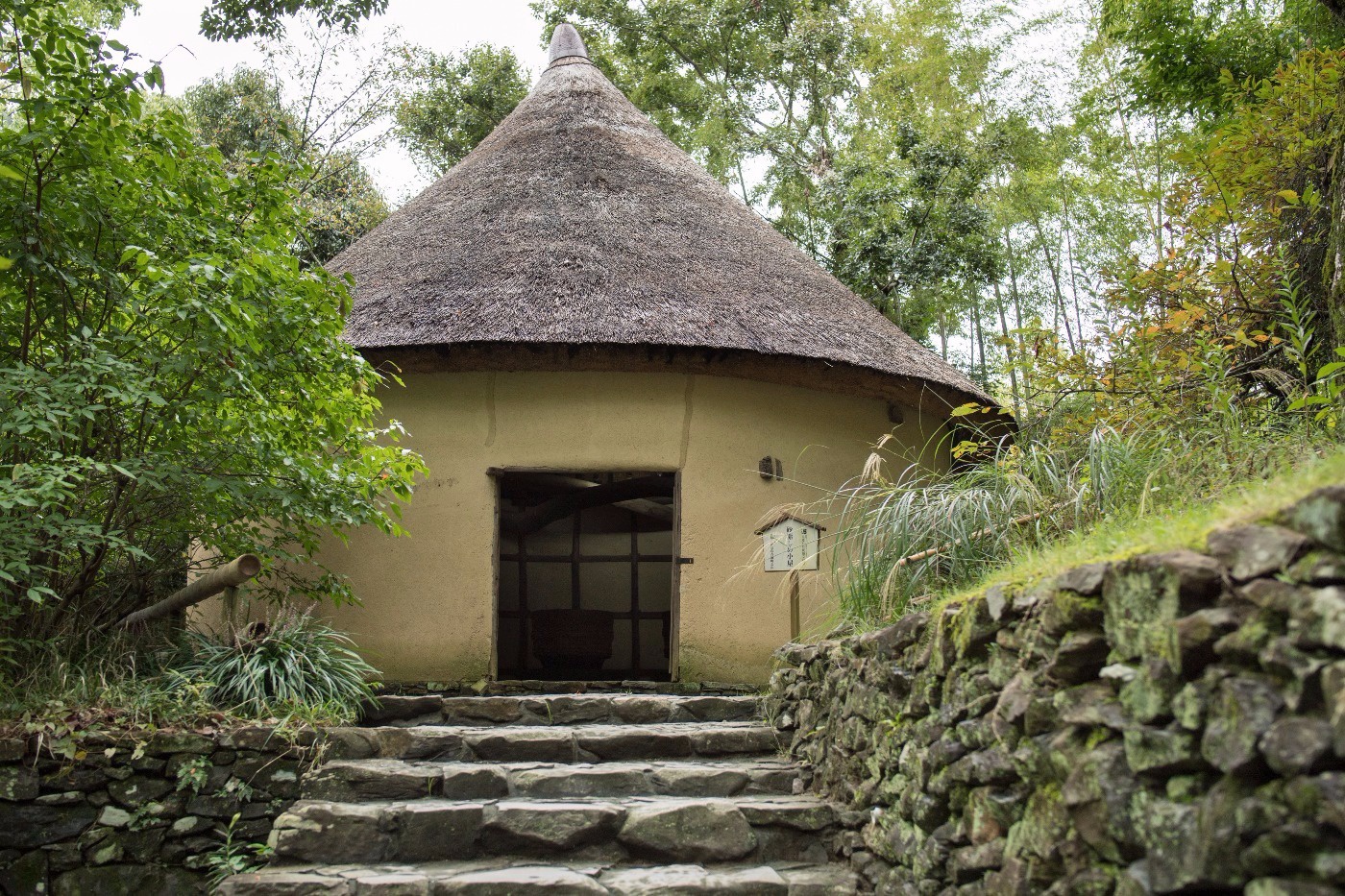 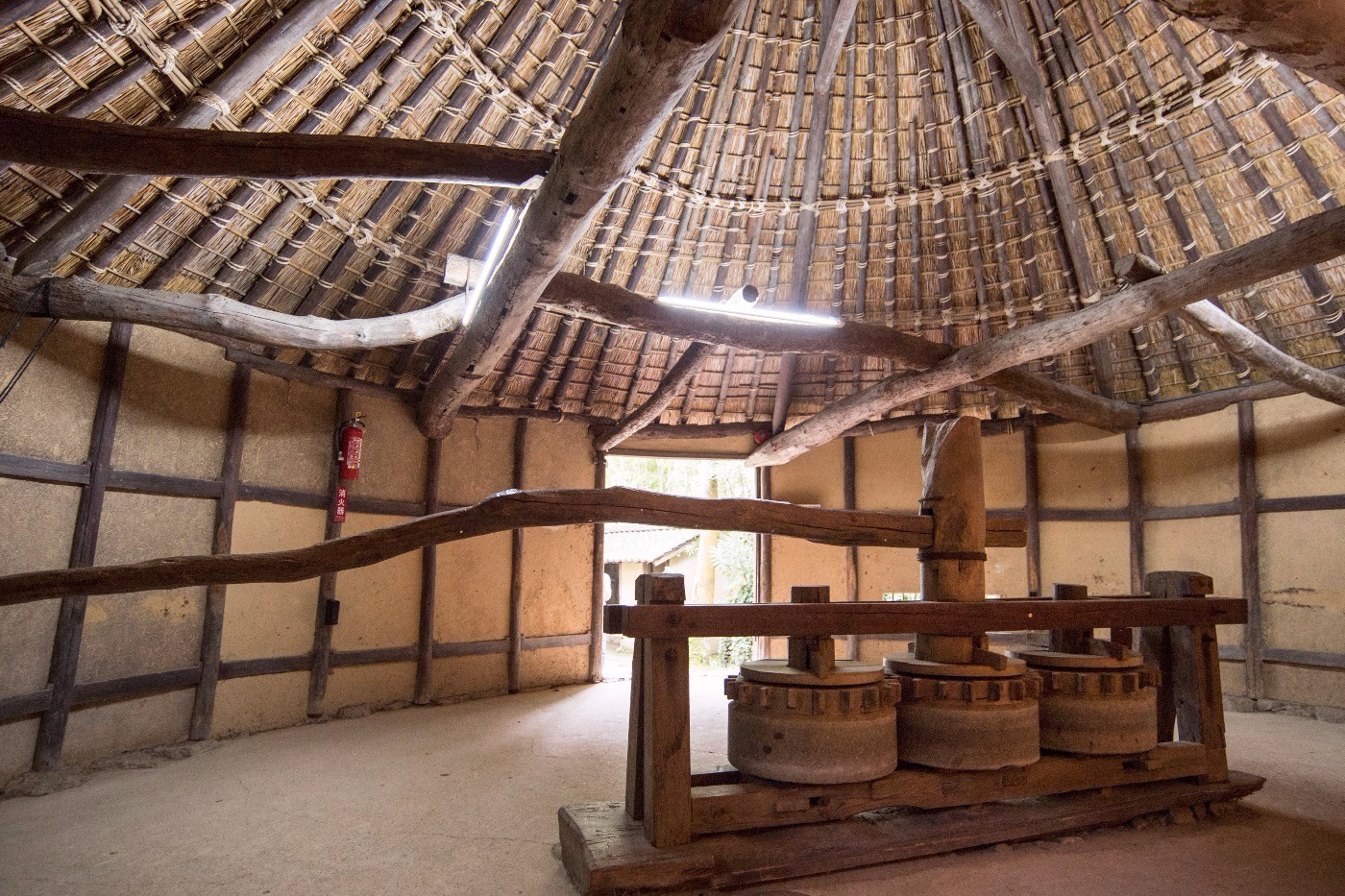 The Satoshime Goya—with its distinctive thatched roof—is a round building that was used for squeezing the juice out of sugarcane as part of the traditional production process for Wasanbon; one of Kagawa’s key representative exports. Today, only two such conical-roofed buildings still exist in the whole of Japan, and both are located in Shikokumura Museum. They are designated as items of national cultural heritage. Three stone mills are installed in the center of the building for the purpose of squeezing the sugarcane. The attached turning arm was pulled by cattle in order to turn the mills. Telltale signs indicate places where the bodies of the large cows rubbed against the sides of the building, wearing down its pillars, and give the building a very real feel. 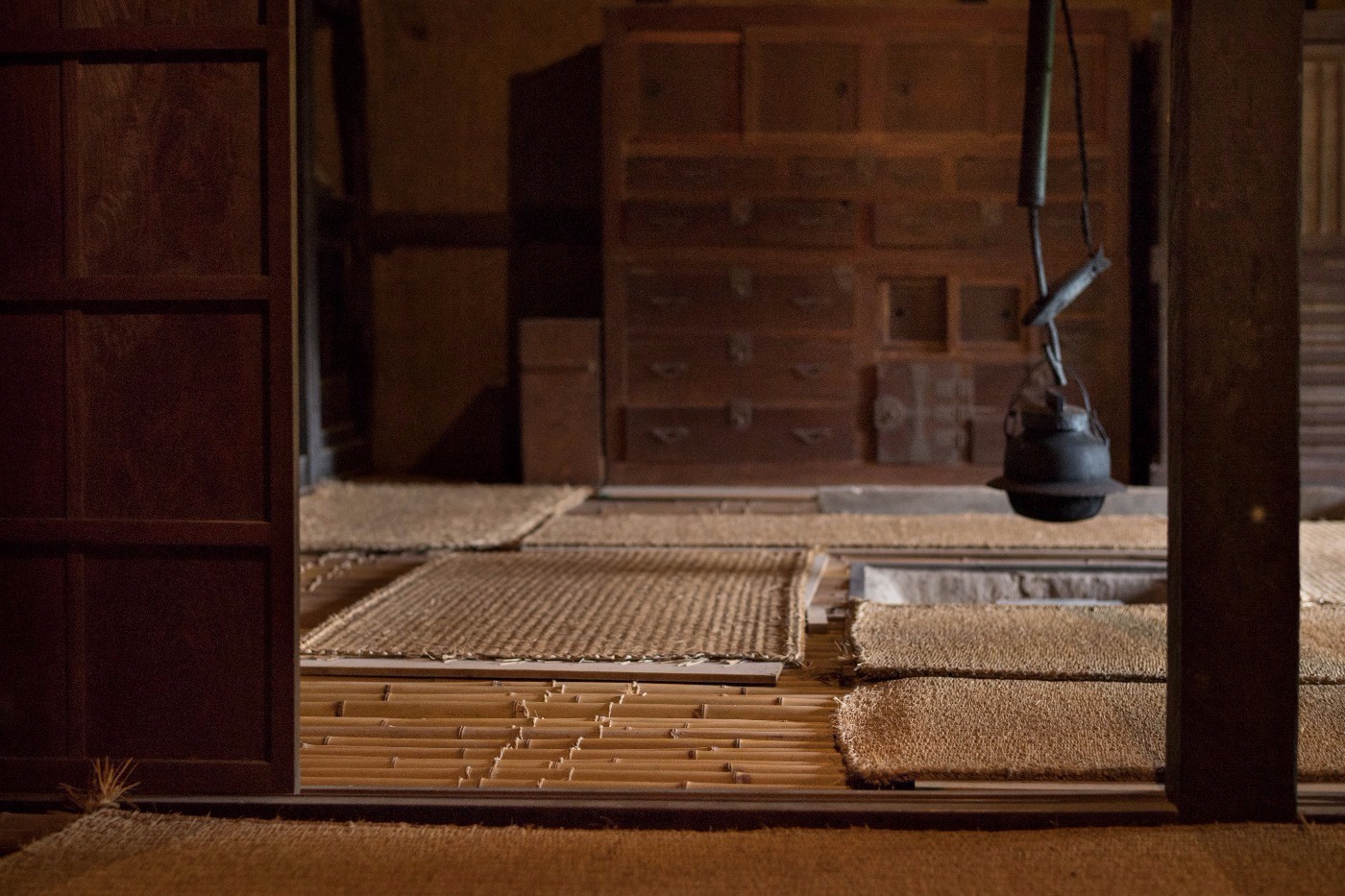 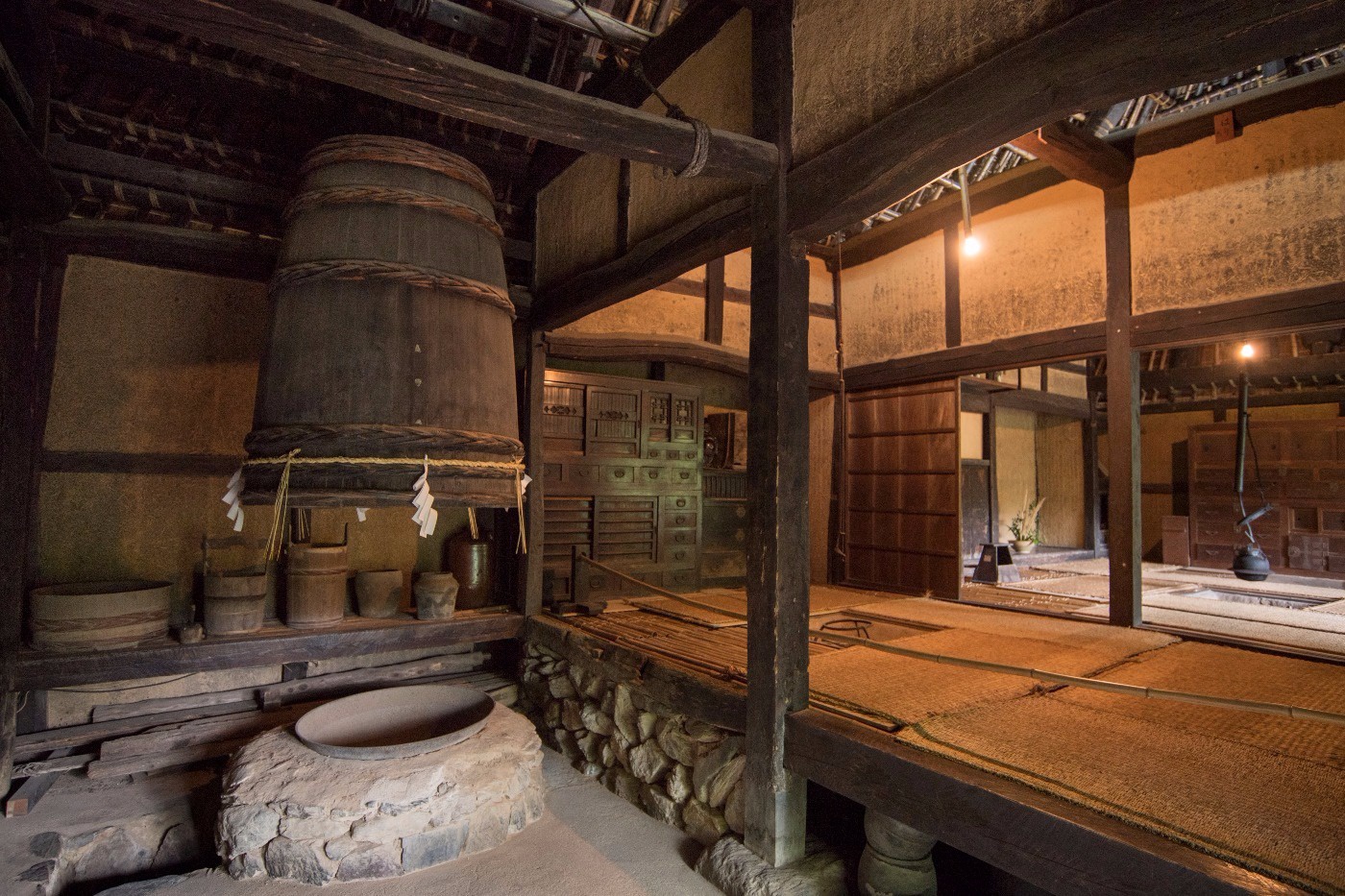 The Former Kono Family Residence originally stood in a place deep in the mountains of Ehime prefecture. It can be seen from the fact that affordably priced and easily maintainable bamboo was used for all of the building’s floors that the residents lived a modest life in the mountains. Every room has an irori (a traditional Japanese floor hearth), and there is also a large pot for steaming kozo plants (the raw material used for producing washi paper); which is unusual to find inside a building as it would typically have been placed outside. It’s fun to imagine what life at the time might have been like for the family, warming themselves inside the house as they worked during the cold weather season. 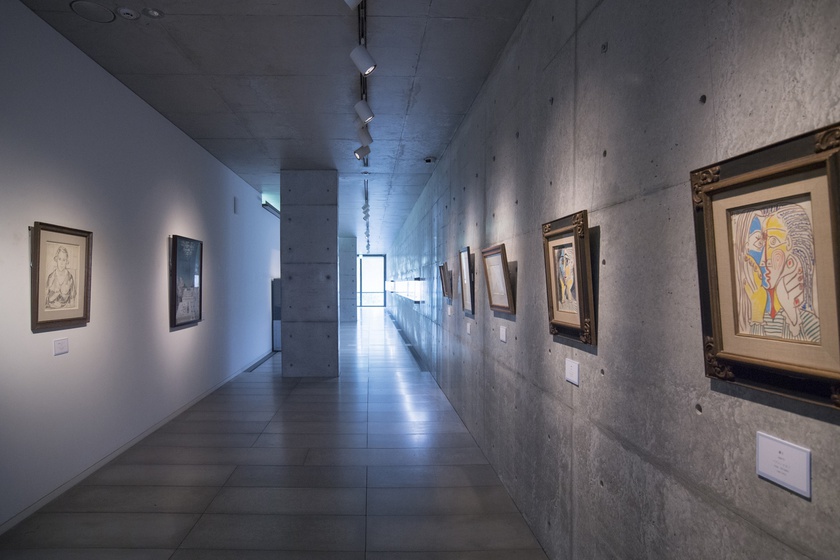 The Shikokumura Gallery is located high up on the hill, and was designed by architect Tadao Ando. The gallery is home to a wide range of artworks, with a focus on paintings and sculptures, including works by masters such as Renoir and Picasso. 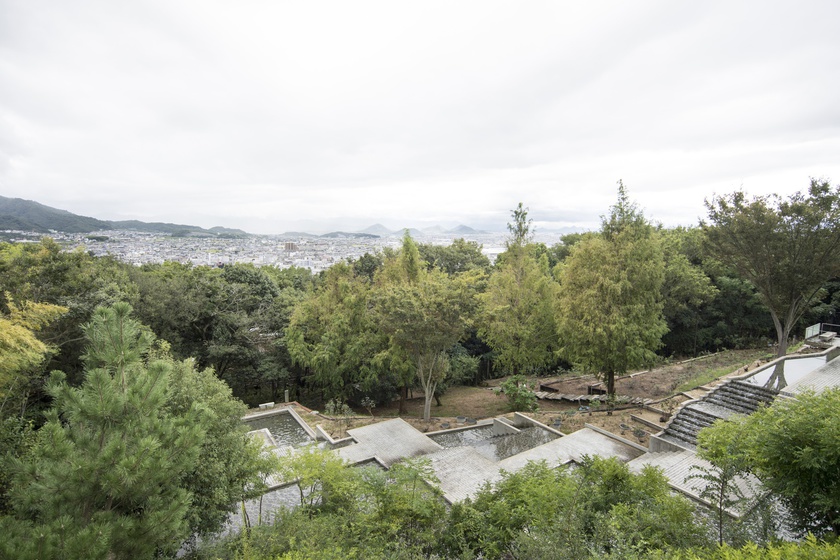 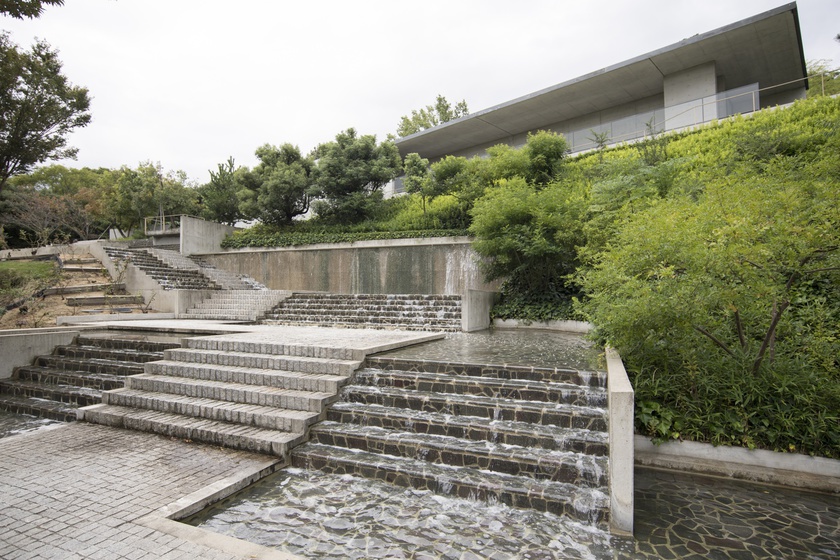 From the balcony, visitors can see both the Suikei Teien water landscape garden, surrounded by a variety of flowers and greenery, and the Sanuki Plain spreading to the south of the gallery. It starts to feel as though one might forget the passage of time, lost in the sound of smoothly flowing water and the refreshing view. 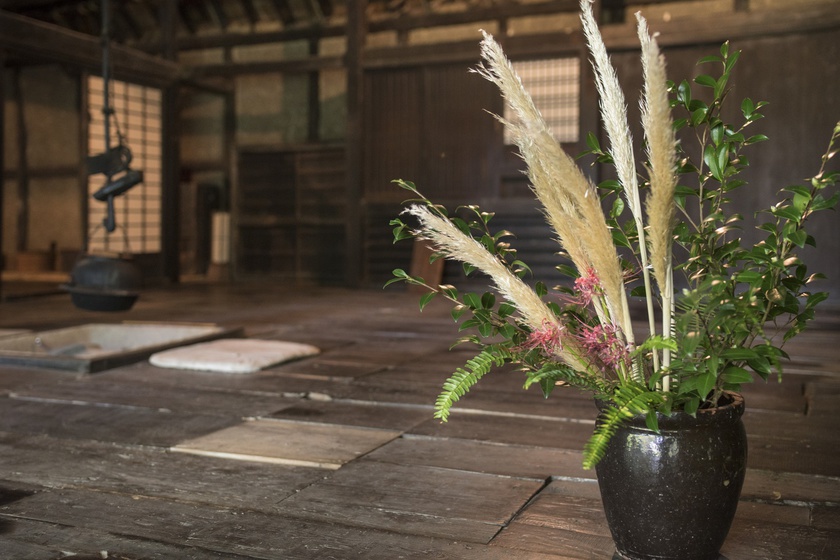 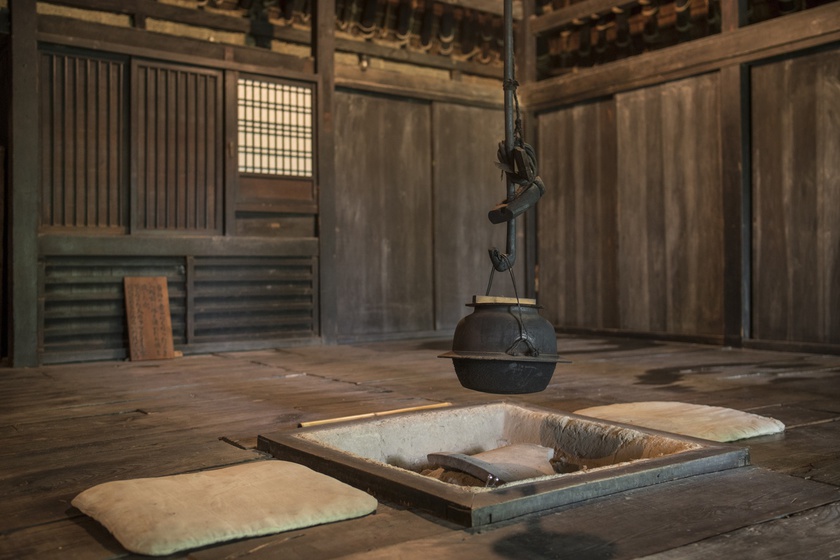 The interiors of the well-maintained old houses are decorated with fresh flowers that bloom in the village. It feels as though time has stopped, with things kept just as they were when the residents left them.
If you sit down and take a rest on one of the cushions on the building’s engawa (veranda) as suggested, you can sit in comfort and enjoy the wonderful sounds of nature’s background music; the sound of water, the singing of the birds, and the chirping of insects. On the second and fourth Sundays of each month (except between June and September), fires are lit in the irori hearths, and visitors are greeted by volunteers with a drink of traditional Japanese tea.
Please visit Shikokumura Museum for yourself, and enjoy a wonderful time experiencing the traditional way of life in the Shikoku of bygone days, and the living history that still draws connections with modern times.