Today, 800 shishimai teams remain active. Visit the land of shishimai, the traditional lion dance that has undergone a unique evolution.

Shishimai is said to have been introduced from China and India to Japan.
There is a culture of shishimai around the country, but Kagawa, the smallest prefecture in Japan, has the largest number of shishimai teams (shishigumi).
It has an outstanding concentration of shishimai performers. We explored the reason why. 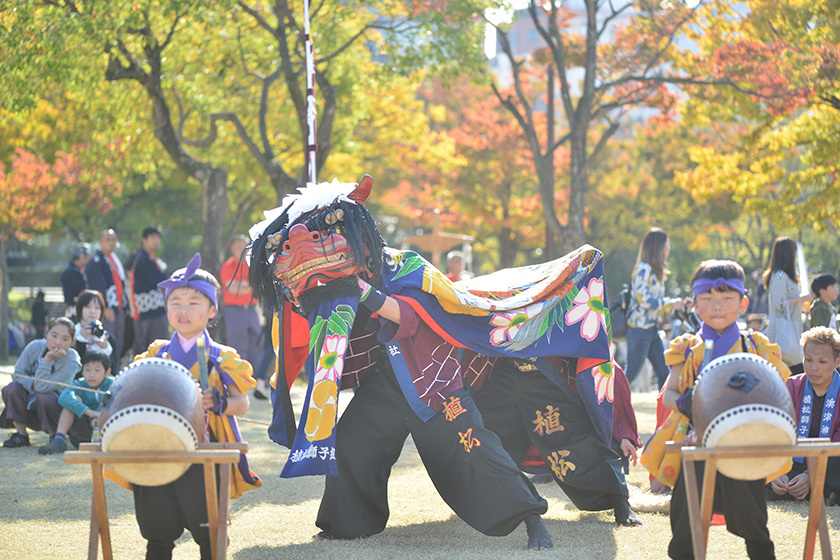 In fall, trees change color and the aroma of fragrant olives wafts through the air. The sound of drums and bells are heard here and there in Kagawa. 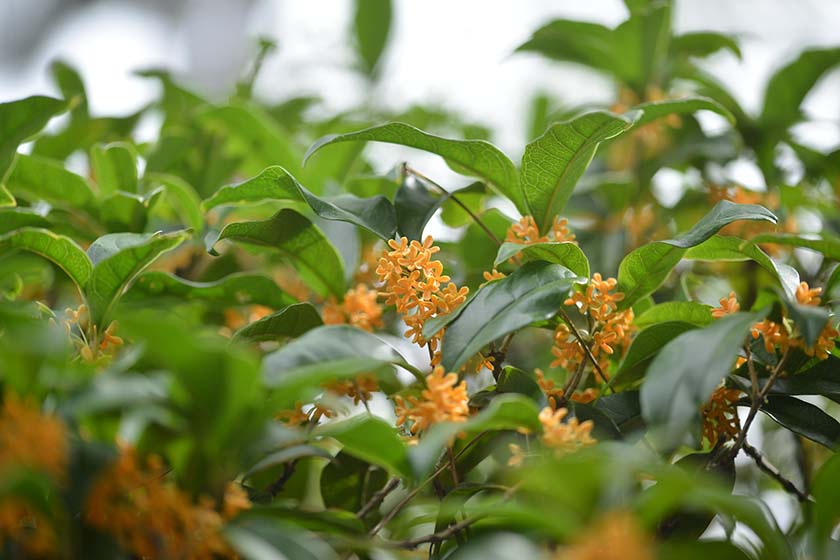 Shishimai is known as a New Year's event. In Kagawa, shishimai is associated with fall, dedicated to local shrines wishing for peace and bumper crops.
Shrine-based shishimai teams formed in each village and are said to have peaked at 1,200 teams. 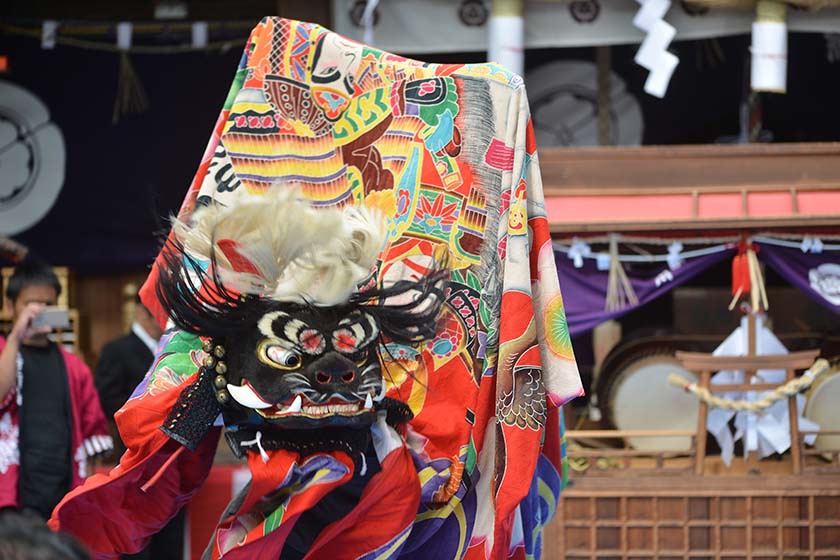 “Currently, we have about 800 teams, but they completely differ among shrines and communities,” said Mitsuru Sogo, chairman of the Sanuki Shishimai Hozonkai (Shishimai Preservation Society). Since shishimai was orally handed down for many years, the dance, music, instruments and terminology differ even among teams that belong to a same shrine.
“Today, you can communicate it by using a video, but it limits the variation of the performance too much. The fusion of predecessors’ teachings and the individualities of contemporary performers allows shishimai to continue to evolve in Kagawa." 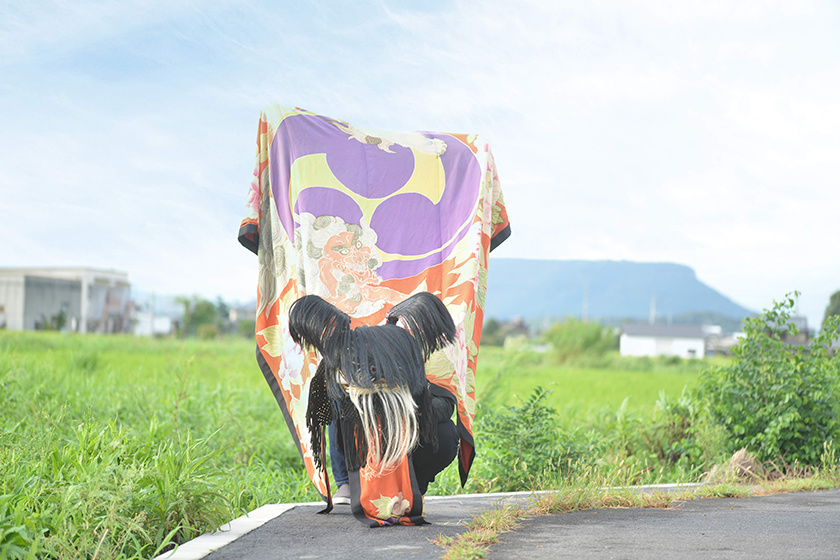 The establishment of the preservation society began to gradually increase interaction among the teams. In some communities, a team that had ceased to operate resumed its activity.
Mr. Sogo enthusiastically expressed his wish to cooperate with other likeminded people in handing down and preserving the interesting culture of shishimai in Kagawa. 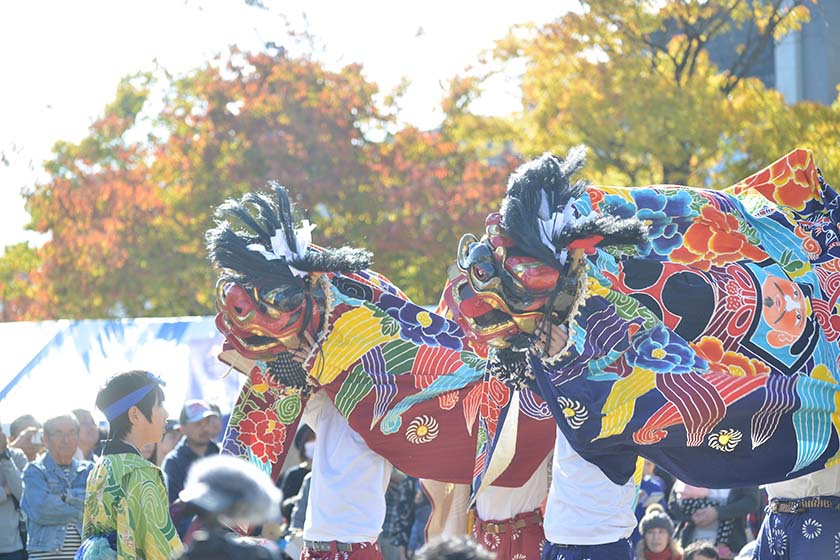 When you watch shishimai, you should focus on yutan (the piece of cloth that a lion wears on its body).
Victorious warriors from the Warring States period, a battle between a dragon and a tiger and other strong-looking, lucky subjects are drawn on an expensive piece of silk. This is unique to Kagawa. 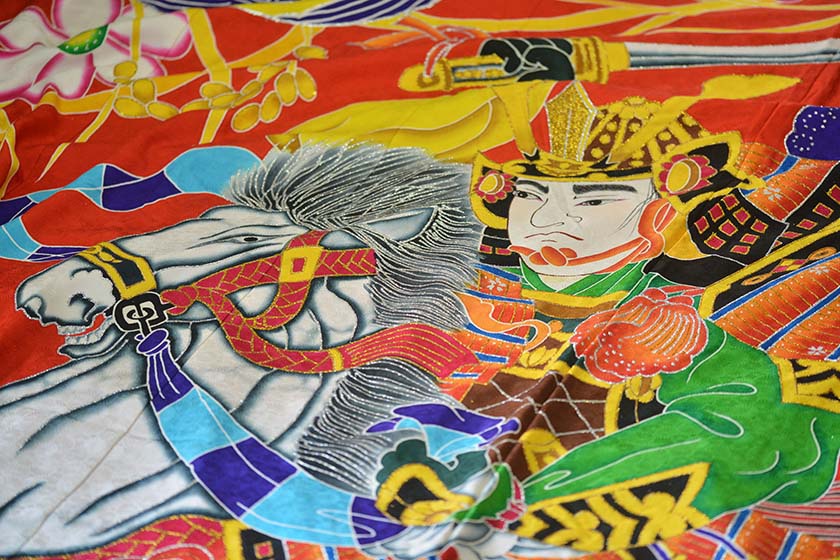 “The shishi (lion) has the role of driving away evil and purifying the path of the omikosi (portable shrine), so it has to be tough.”
We visited Okawahara Senshokuhonpo, a studio that makes numerous yutan cloths for Sanuki Shishimai. Makoto Okawahara, the seventh representative, guided us around the studio. 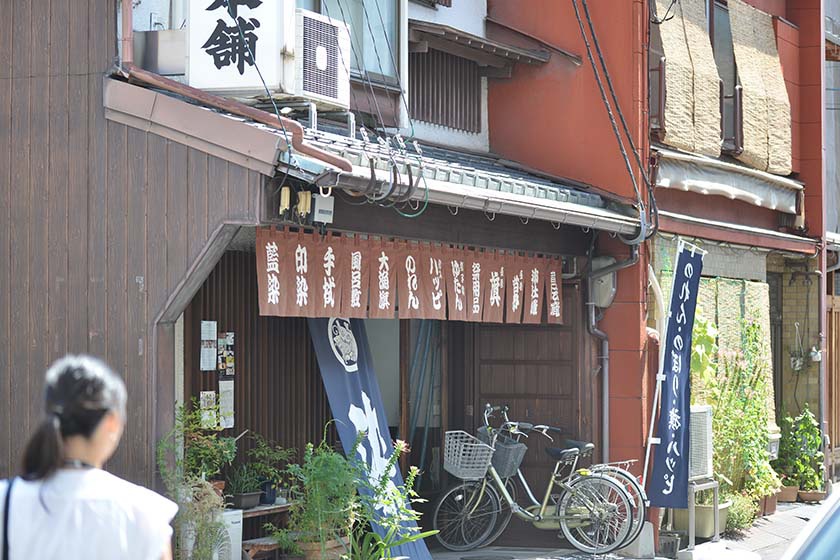 Sanuki-norizome, a traditional technique in Kagawa, ensures that the starch paste made from a mix of glutinous rice and lime or the equivalent does become get stained with subsequent dye on the cloth.
The paste is put into a cylindrical bag made of tanner Japanese paper and squeezed out before being applied to the cloth. 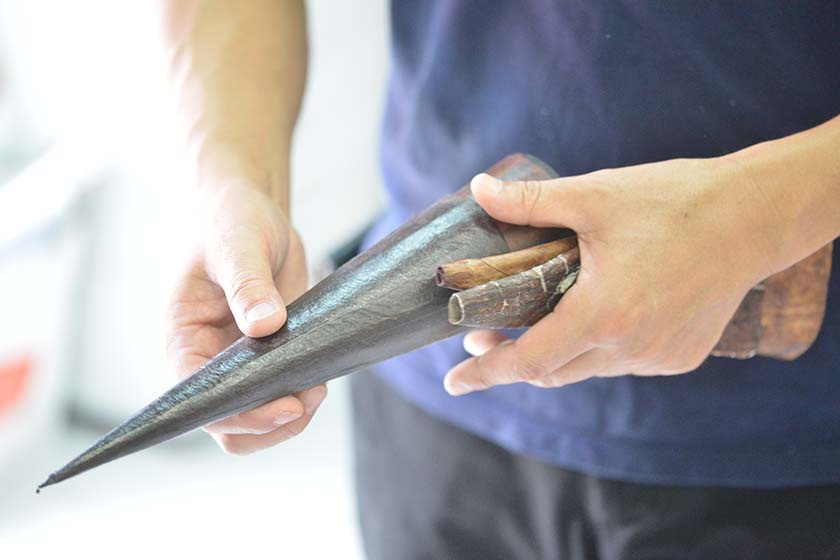 Shishimai is dedicated to gratitude for fall crops. This is why the starch used for dyeing the yutan must be made from rice harvested in Kagawa. 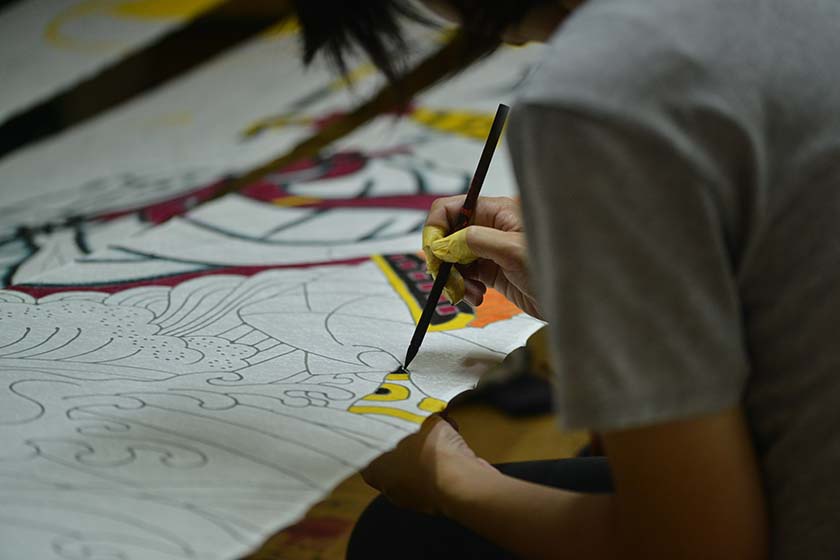 Tinge and steam it at a high temperature before washing it.
The starch at the contour part is washed away and replaced by the white color of the cloth. 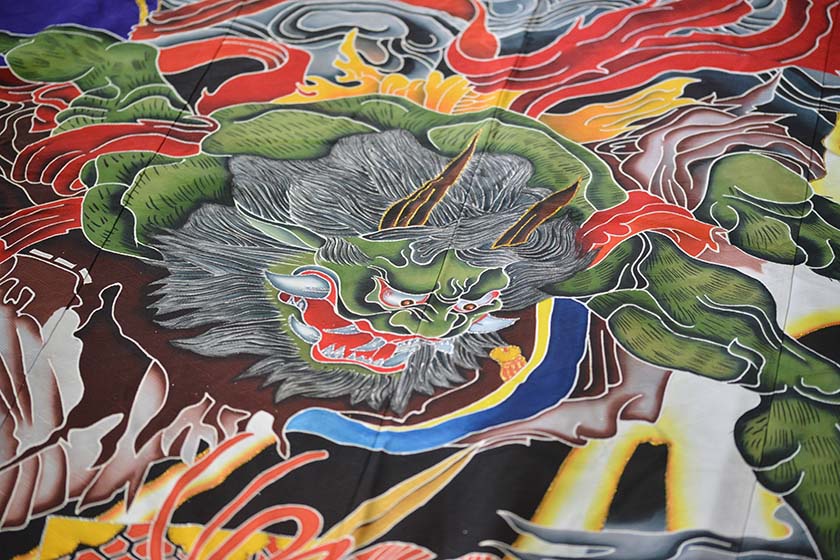 More shishimai teams bring their own designs when ordering a new piece of yutan.
Unlike the classical version of yutan designed by a craftsman, many of these original designs originate from freewheeling ideas and are unconventional. 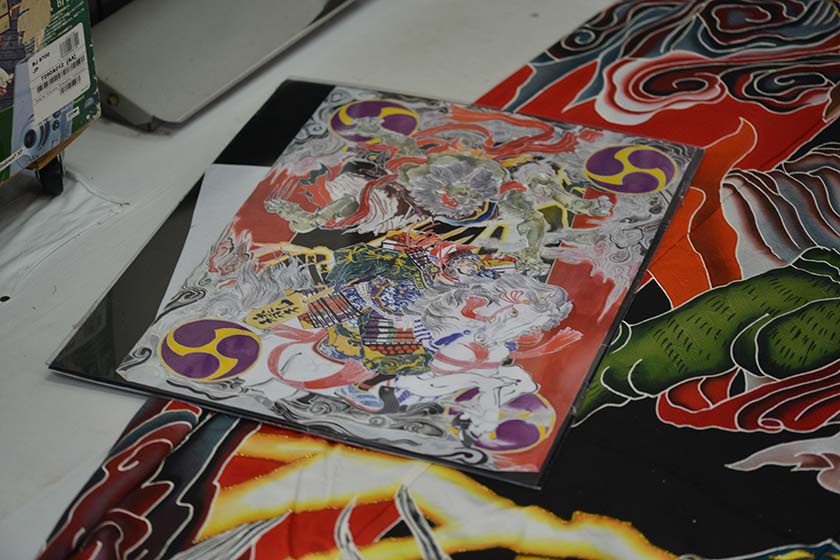 We asked Mr. Okawahara for some stories about difficult-to-handle requests. His answer was contrary to our expectations. “It’s rather fun, and motivates us to work around restrictions to satisfy their requests.
Although this is a traditional craft, we cannot survive if we remain unchanged. We must keep taking on challenges.” 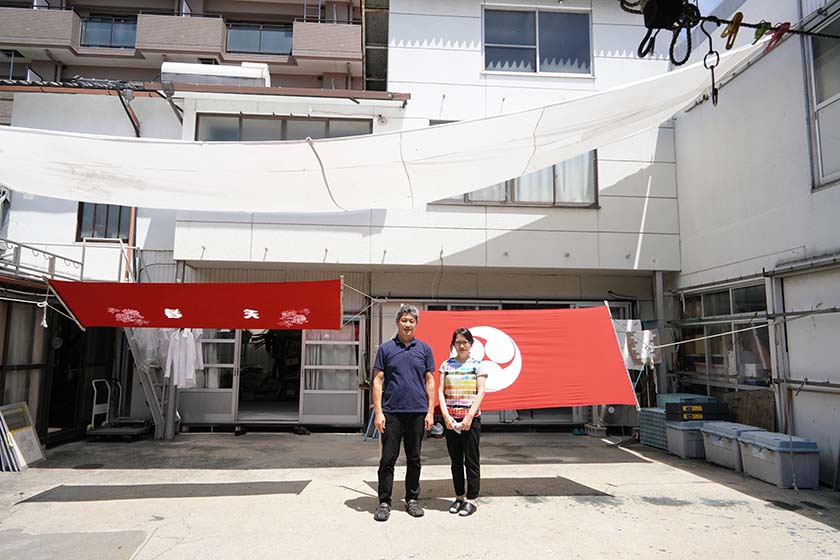 Made in many different colors, yutan entertains viewers visually. Behind it, we saw the craftsmen who are eager to try new things while respecting tradition. Shishimai can be seen at numerous shrines mainly on weekends in September and October.
Since it is a fall ritual and the performances are concentrated in the same period, we rarely have opportunities to watch shishimai from anywhere other than where we live. 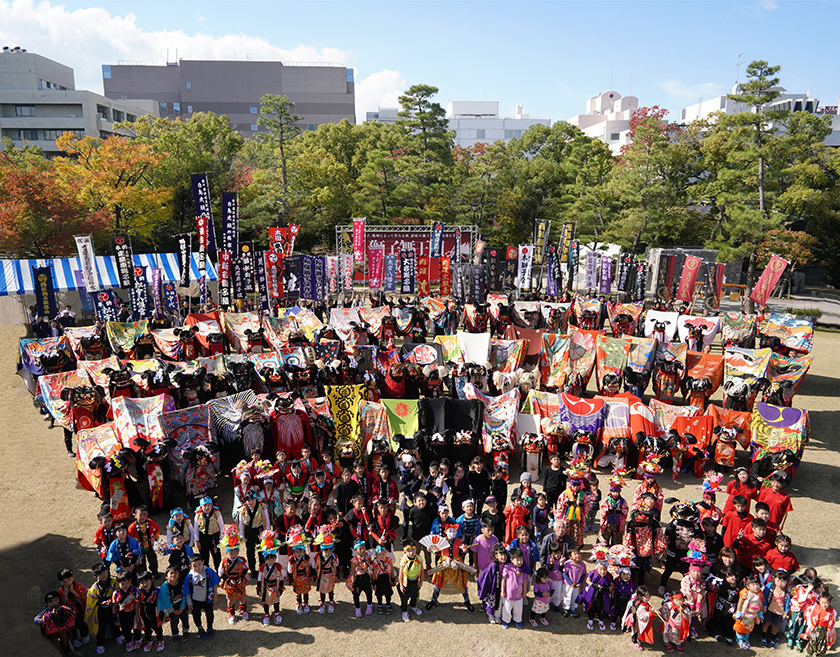 Shishimai Okoku Sanuki takes place in Takamatsu-shi in early November.
Nearly 60 shishimai teams gather from within Kagawa Prefecture. It is a sight to see. In some areas, children called kyokuchi or taikouchi respectively dance or play drums.

Coming from all around the prefecture, the shishimai teams have unique characteristics and it is difficult to decide where to focus. Spectators are glued to the performance of Toragashira-no Mai, which tells a story and incorporates some elements of kabuki. 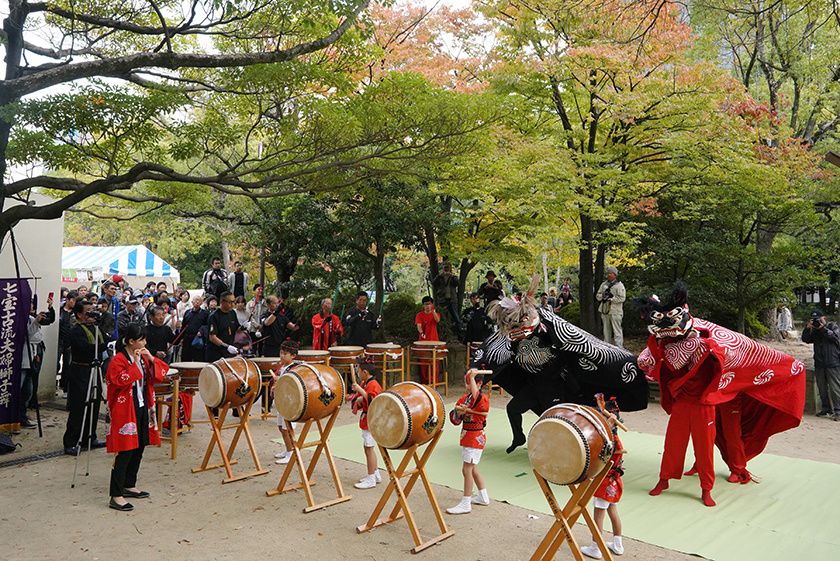 Shippo Koryuhonmura Myoto Shishimai shows how two lions, a male and a female, grow together harmoniously. The brave sound of drums makes the performance very impressive.

They are considered to be particularly valuable among the numerous shishimai teams. Toragashira-no Mai is designated by Kagawa Prefecture as an intangible folk-cultural property, while Shippo Koryuhonmura Myoto Shishimai is designated by Mitoyo-shi as an intangible folk-cultural property. You should watch each of them at least once. The workshop for making a lion head is very popular among children. They assembled cardboard, colored it and completed their original lion heads.

The culture of shishimai has been handed down in these communities for more than 400 years.
It is supported by traditional craftwork that forms the lions, members of the shishimai teams that breathe life into it and everyone that loves shishimai. 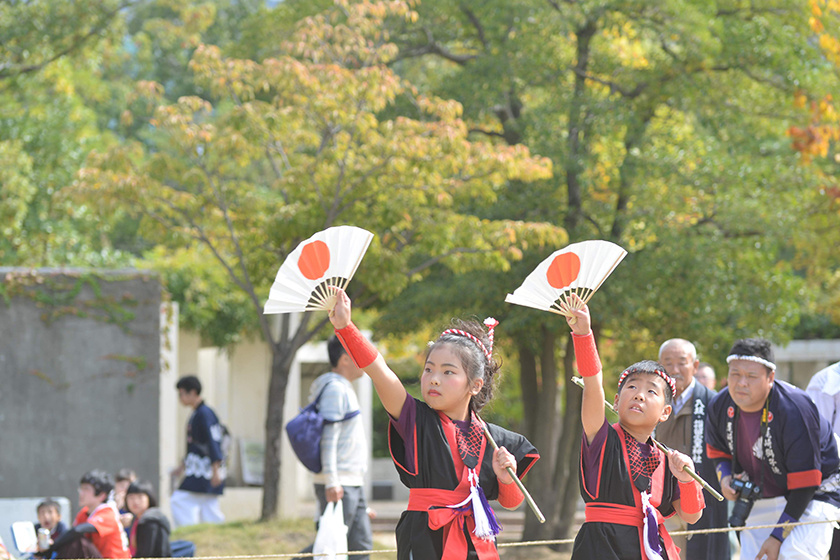 Shishimai will continue to characterize the season of fall in Kagawa for many years to come.
It will change with the passage of time and become even more refined.