Imagine that you are a feudal lord or princess and make your wish come true by feeding sea breams.

Tamamo Park is a historic site designated by the Japanese government. It was converted from the ruins of Takamatsu Castle where in the lord of Sanuki Province and the feudal lord of Takamatsu Domain resided. 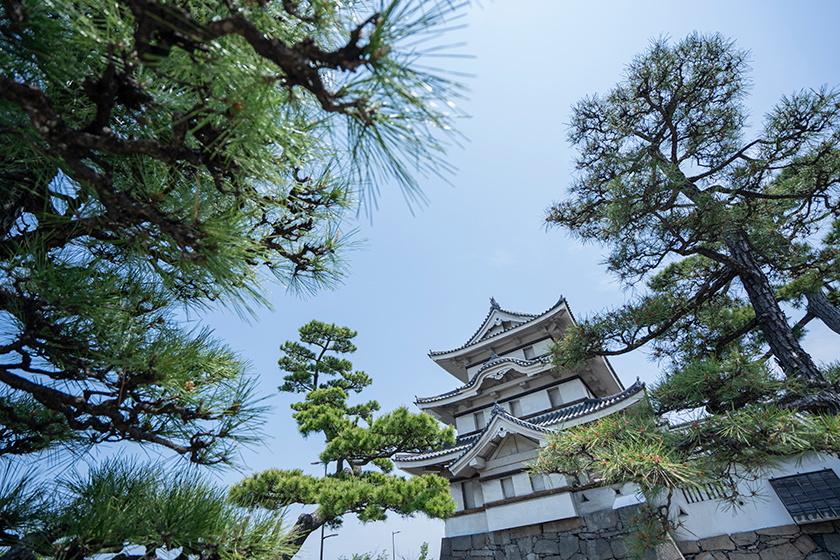 It is one of Japan's three greatest castles on water (mizu-shiro). Uniquely, it has ocean fish in the moat connected to Seto Inland Sea. 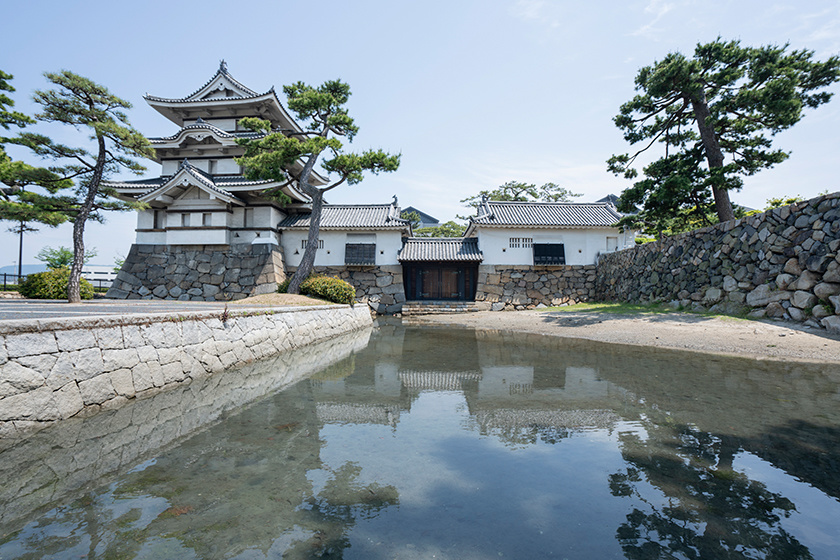 The gate, Mizute no Gomon, at Takamatsu Castle used to face the ocean. Under the alternate resident duty system, the feudal lord got on a boat at the gate and transferred to a larger ship offshore to go to Osaka. 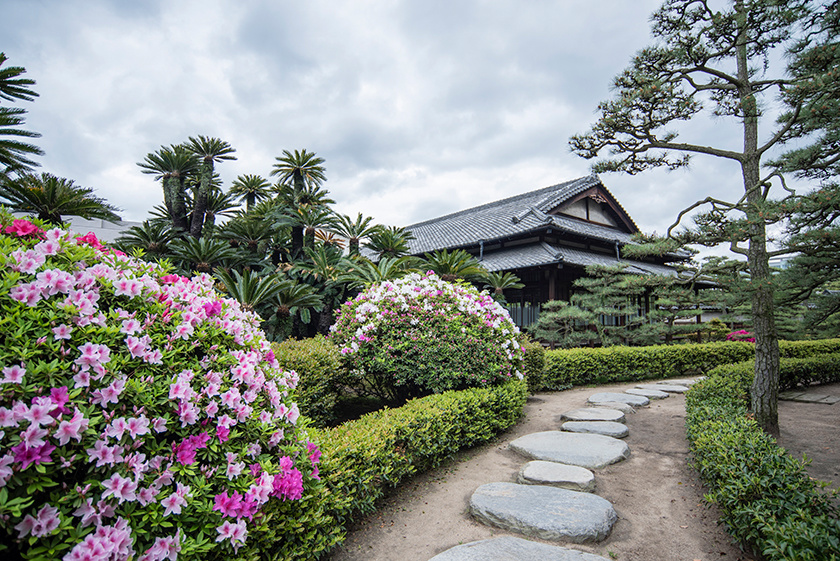 There are many nationally important cultural properties on the premises. The spectacular garden of Hiunkaku is one of the scenic spots specified by the national government. It is a walkable distance from JR Takamatsu Station, Kotoden Takamatsu Chikko Station and Takamatsu Port. It is easy for tourists to drop in between destinations.

Generally, colorful carp are kept in the moat of a castle. Surprisingly, however, sea breams swim in the moat of Takamatsu Castle, because ocean water is drawn into the moat. 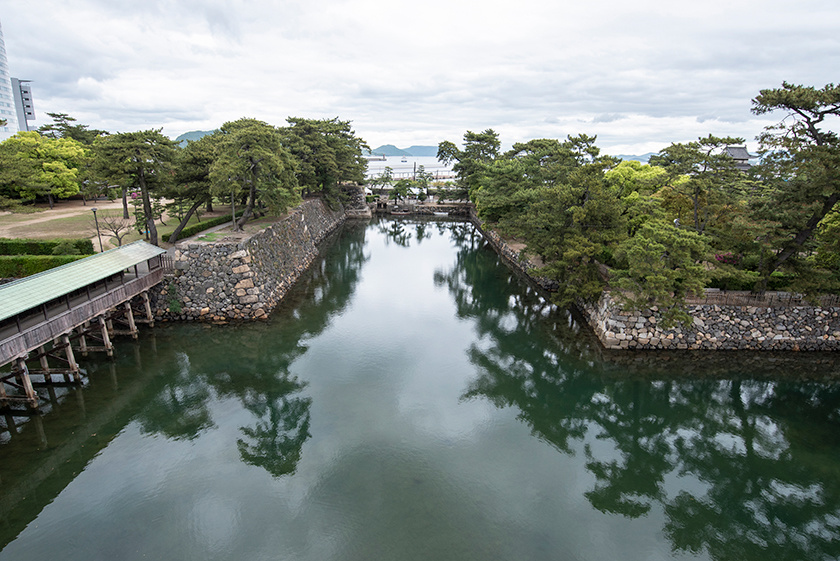 The word for sea bream is tai in Japanese. It is specially regarded and is always associated with good luck, because the pronunciation is part of the word meaning lucky (omedetai), unlike the general image held by Western people. Today, we came for the popular boating attraction to feed the lucky fish. 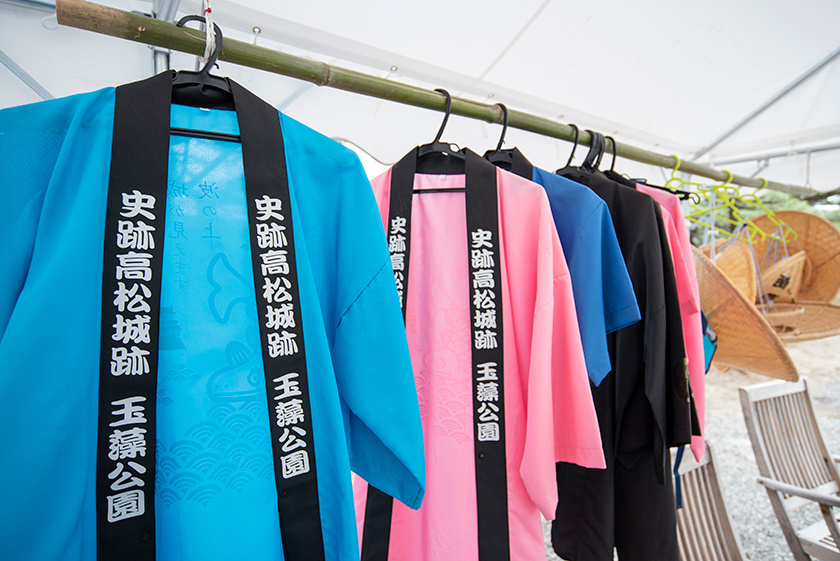 Check in at the reception. Wear a happi coat with printed sea breams and a sedge hat. Now boarding! 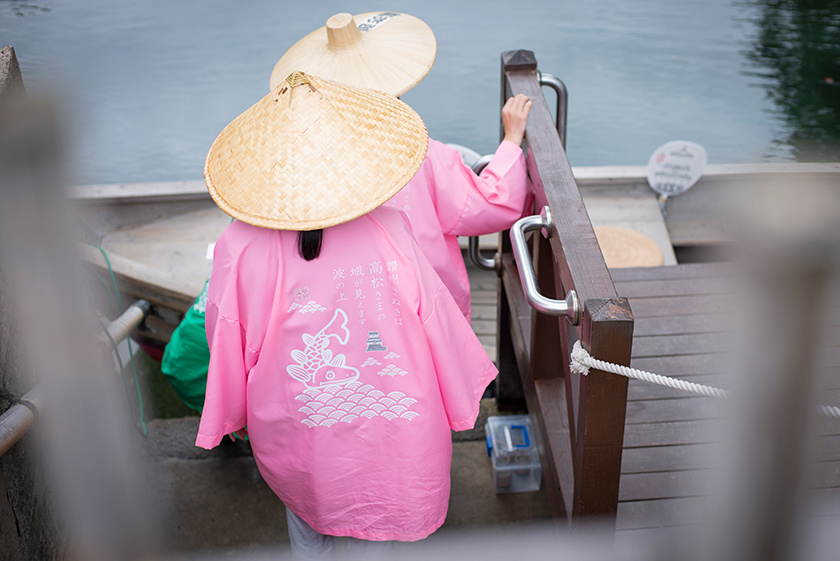 A small boat fits about five people. Be careful to stay balanced when boarding. 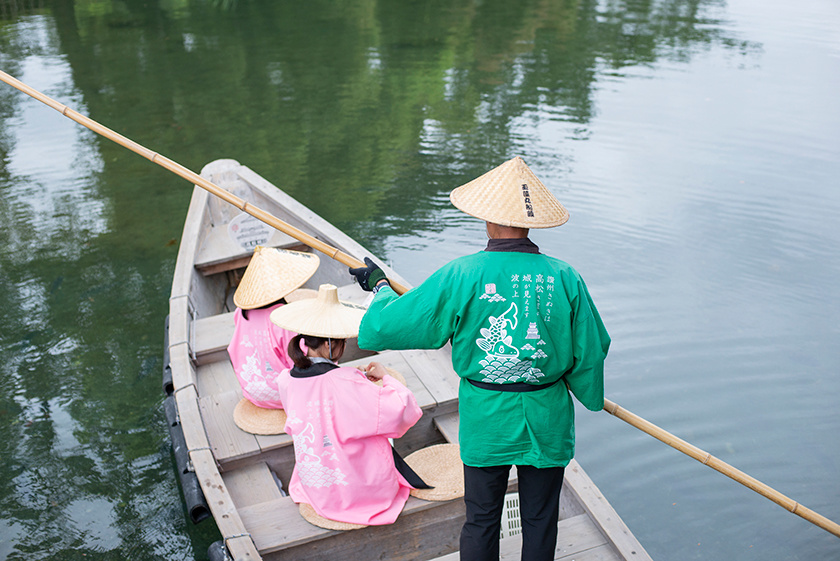 There were black fish on the surface of the water. They quickly surrounded our boat. Sea bream are not as gorgeous as carp. However, you can appreciate their deep allure. They are sea breams after all. 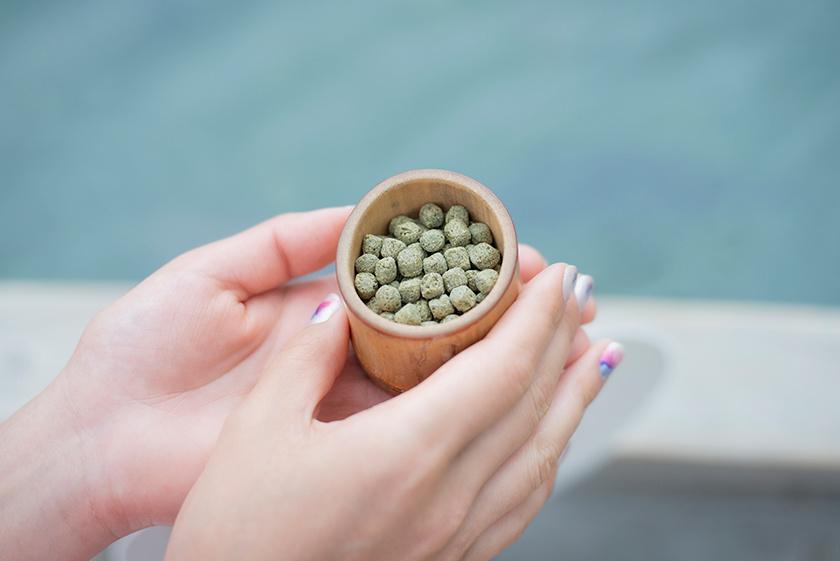 The staff handed sea bream feed to passengers. It is said that your wish will come true if you feed a sea bream, even if your wish is very ambitious, because it is the lucky fish. "Throw the feed diagonally in front. Watch the sea breams eating the feed (even if the boat moves forward)."
Mr. Kawai gave us a tip. He was the boatman of the day. 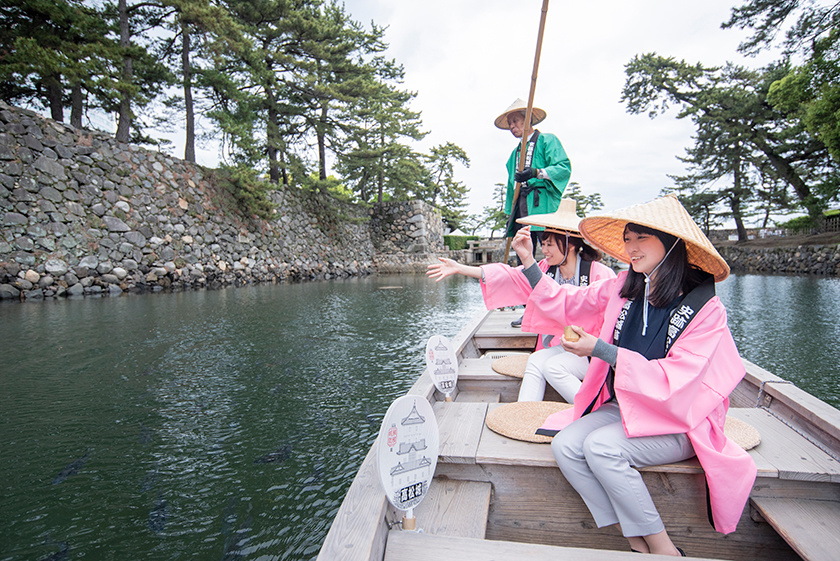 We laughed and exclaimed, listening to the boatman's witty comments about the castle's history. The boat is headed to the castle tower with sea bream.

The stone wall of the foundation of the keep is about 13 m high from the sea's surface. It used to support the castle tower. The tide of the sea affects the water level of the moat because the moat is linked to the sea. Look at the water mark from the high tide on the wet lower part of the stone wall. 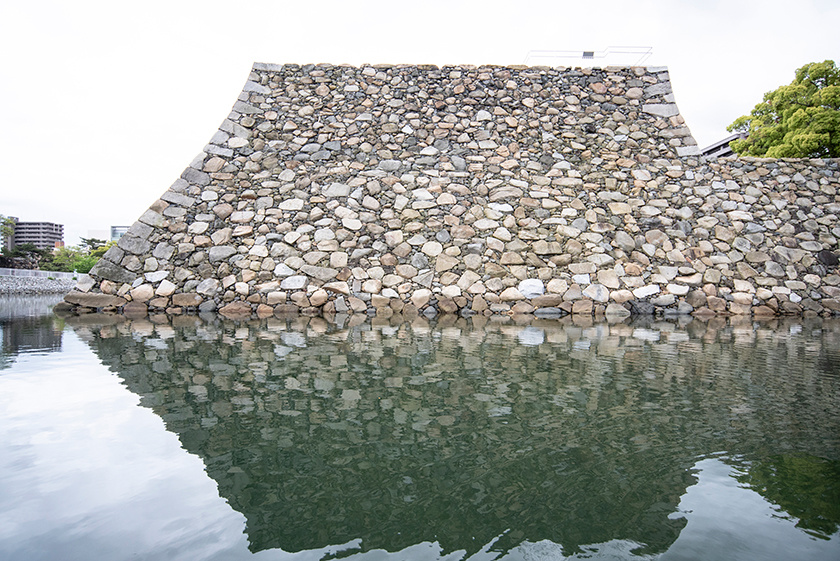 There was once a castle tower above the foundation of the keep, about 28.9 m high. The distance from the alluresea surface to Shachihallureoko is about 42 m. Shachihoko is similar to a roof ornament with the appearance of a Japanese imaginary creature. I tried hard to imagine the castle tower. However, it was difficult to imagine something from scratch.

"Use the round fan now!"
The boatman told us to hold the round fan installed in the boat. We had been told that it was not for fanning ourselves beforehand. The fan features an illustration of the castle tower. Do it at the right time. Don't miss out!

The boat sails slowly from the north side of the foundation of the keep to the east side. "There is a heart-shaped stone on the wall of the base of the keep facing east. You will be happy if you find it."
Hearing the boatman's voice, passengers started to look for the stone with wide eyes. 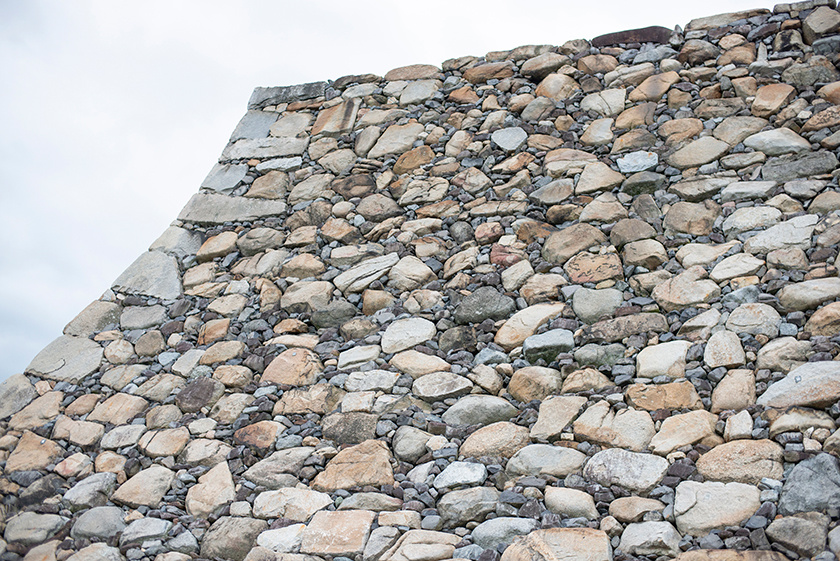 Found the stone with the boatman's clues. Even though I was not absolutely sure if it was the right one, I'm already happy, having found it. The gray heart-shaped stone. Did you find it?

We finished the 30-minutes of boating and returned to the boarding area. The passengers were given a commemorative badge featuring the same castle tower as on the fan. 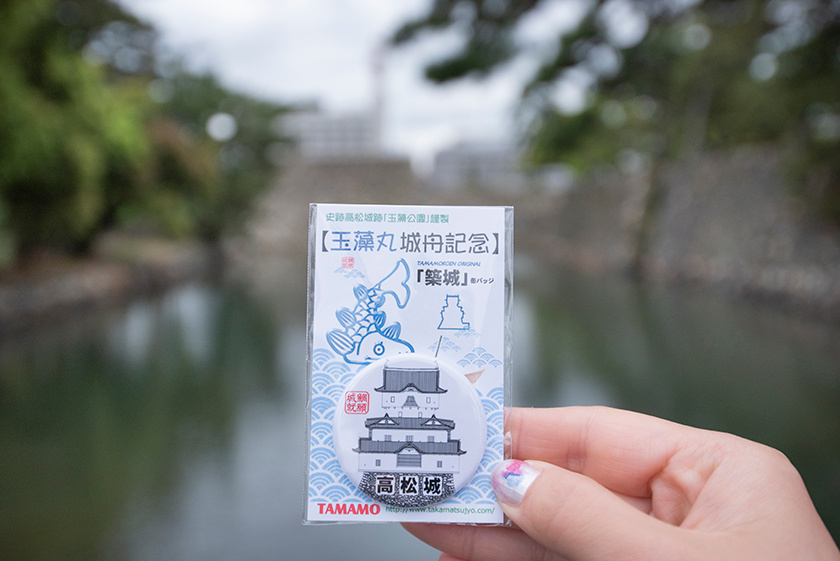 Have an experience unique to Takamatsu, the castle town, at a castle surrounded by stone walls. Ride in a boat and let sea breams follow you. Relax and enjoy yourself while feeling like a feudal lord or princess.